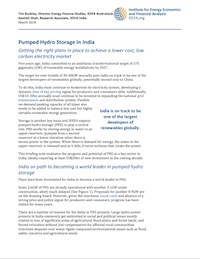 Five years ago, India committed to an ambitious transformational target of 275 gigawatts (GW) of renewable energy installations by 2027. The target for new installs of 30-40 GW annually puts India on track to be one of the largest developers of renewables globally, potentially second only to China. To do this, India must continue to modernise its electricity system, developing a dynamic time of day pricing signal for producers and consumers alike.

Additionally, USD 10-20 billion annually must continue to be invested in expanding the national grid transmission and distribution system. The flexible on-demand peaking capacity of all types also needs to be added to balance low cost but highly variable renewable energy generation. Storage is another key issue and IEEFA expects pumped hydro storage (PHS) to play a central role. PHS works by storing energy in water in an upper reservoir, pumped from a second reservoir at a lower elevation when there is excess power in the system. When there is demand for energy, the water in the upper reservoir is released and as it falls, it turns turbines that create the power. This briefing note evaluates the progress and potential of PHS as a key sector in India, ideally requiring at least USD 20 billion of new investment in the coming decade.