Gridtential Energy and Crown battery have developed a new silicon wafer battery that they claim, combines the best of lead and lithium-ion performance. 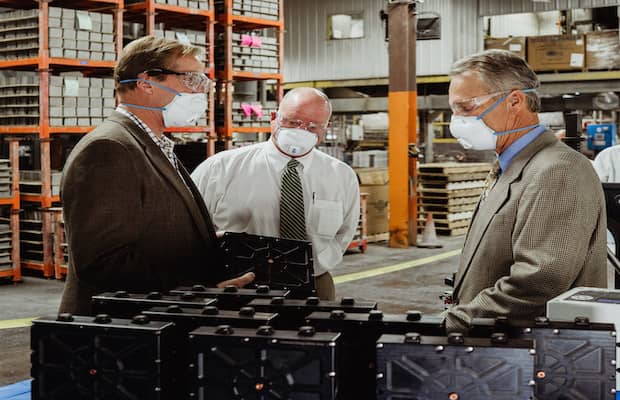 Gridtential Energy and Crown battery have developed a new silicon wafer battery that the two firms claim combines the best of lead and lithium-ion performance. Using technology similar to a solar cell, Gridtential Energy’s breakthrough Silicon Joule technology allows batteries to deliver up to 5X the power density with up to a 40 percent weight reduction – and it can be manufactured in current lead battery plants.

The key working point of the technology is that it replaces the lead-grid and cell connecting lead-strap material inside a traditional lead battery with a treated silicon wafer.

The two firms – Gridtential Energy, the inventor and developer of Silicon Joule bipolar battery technology and Crown Battery, a leading global manufacturer of 99 percent recyclable batteries – came together recently at the Crown Battery manufacturing facility to complete the largest production run of the bipolar batteries to date, significantly exceeding yield and throughput targets established for the current design. Manufacturability validation was a key objective for the event and with the benefit of pre-manufactured materials, including treated silicon wafers, the rate of manual production reached less than 5 minutes per unit.

“The technology has created an innovative class of lead batteries with silicon at its core. It is a design-driven, low cost, high performance, patented energy storage solution that provides improved power density, cycle life, and temperature range while retaining full lead battery recyclability.  This is all accomplished while leveraging existing technologies from mature industry supply chains – allowing rapid adoption by utilising current lead-battery infrastructure,” the firms issued in a statement.

John Barton, CEO of Gridtential Energy said that industrialisation is a key step in bringing innovation to industry and we are very pleased to see Silicon Joule batteries being produced seamlessly on the production floor at Crown Battery.

“We feel fortunate to work with like-minded battery manufacturers and equipment suppliers to produce products that open up new markets and extend the dominance of lead batteries in the energy storage arena by harnessing more of lead’s performance potential.”

Compared to standard lead batteries, Silicon Joule bipolar battery technology removes up to 40 percent of lead and associated weight through elimination of lead grid and strap material; increases cycle life by 3X to 5X; improves DCA (Dynamic Charge Acceptance) 3X to 10X; extends the operating temperature by +10°C; and reduces the cost of ownership over the life of the battery by up to 80 percent, depending on application.