MG Motor India has participated in the first-ever EV trial run, the #NHforEV2020 Tech Trial Run, between Delhi and Agra with ZS EV. 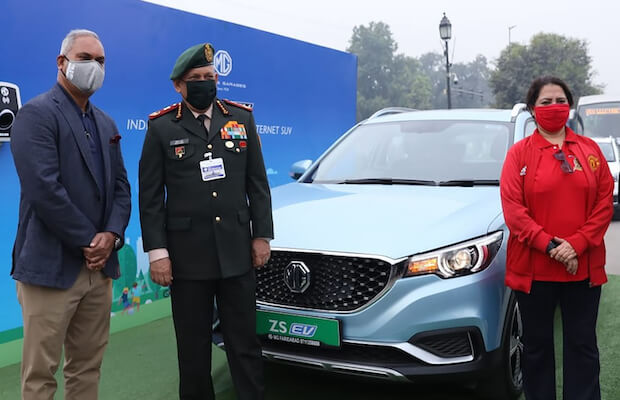 MG Motor India has participated in the first-ever EV trial run between Delhi and Agra with ZS EV. Launched as part of the Government of India’s mission to put more EVs on the road by 2020, the #NHforEV2020 Tech Trial Run was flagged off by Ministers including Meenakshi Lekhi, Member of Parliament – New Delhi and Chairperson – NDMC; Faggan Singh Kulaste, Union Minister of State in the Ministry of Steel and General Shri Bipin Singh Rawat, Chief of Defence Staff (PVSM, UYSM, AVSM, YSM, SM, VSM, ADC) among other senior dignitaries from the government.

The trial run conducted by #NHforEV2020 aims to test the viability of Yamuna Expressway as an e-corridor for public EV transit. The trial run primarily focuses on the charging infrastructure as well as roadside assistance services along the popular tourist route.

Commenting on the launch of the EV Tech Trial Run from Delhi to Agra, Rajeev Chaba, President and Managing Director, MG Motor India, said “We are proud to participate in the first-ever tech trial run from Delhi to Agra with the ZS EV. With its commendable range of 340 kilometers on a single charge, vehicles such as ZS EV are ideal for Delhi-Agra commutes. We would like to thank #NHforEV2020 for bringing together senior government leaders, EV players, and local supply chain stakeholders to nurture and build the EV ecosystem in India.

“We believe that charging infrastructure across India’s national highways will create the right awareness among consumers and help solve the range-related concerns. At MG, we feel proud to have pioneered the EV ecosystem in India with a robust 5-way charging network. We are also actively forging partnerships with key charging enablers such as Tata Power and Exicom to further expand the EV ecosystem of India.”

MG’s 5-way EV charging ecosystem includes free-of-cost AC fast-charger installation at its customer’s home/office, extended charging network along key routes, and charge-on-the-go facility with Roadside Assistance. The British legacy automaker’s 60 kW Agra charging station is in line with this ecosystem. It can be used by any EV compatible with CCS/CHAdeMO fast-charging standards.

The firm had launched ZS EV in India in January 2020 and has retailed more than 1,000 units despite lockdown across the country. In addition to its overwhelming looks, the powerful electric vehicle can zoom from 0 to 100 kmph in 8.5 seconds. It can further charge from 0 percent to 80 percent in 50 minutes. The vehicle comes in two variants, i.e. Excite and Exclusive, as well as three colours White, Red, and Copenhagen Blue. It is now available in 21 cities across the nation including Agra starting at Rs 20.88 lakhs (ex-showroom Agra).