The share of electric vehicles in global passenger car sales is set to quadruple in 2026 from 4.6% last year and exceed 50% from 2033 onwards.

The market penetration of electric vehicles (EVs) is increasing rapidly as a result of the accelerating energy transition, and demand for batteries is expected to skyrocket going forward for both transportation and grid storage. Rystad Energy’s latest Energy Transition Report reveals that the share of EVs in global new passenger car sales is set to quadruple in 2026 from 4.6 percent last year and exceed 50 percent from 2033 onwards.

As per the report, new battery electric vehicle (EV) sales, excluding hybrid vehicles, are expected to record consecutive annual growth going forward. In 2021, the authors of the report expect EVs to take up around 6.2 percent of global passenger car sales, with the share climbing to 7.7 percent the following year. Further projecting that Europe will continue to lead electric vehicle adoption by a wide margin in years to come. Its share of electric vehicle sales is forecast to top 10 percent already in 2021 and 20 percent in 2025. North America and Asia will follow suit, albeit at a slower pace. The Middle East and South America are also projected to see increases further in the future, but the adoption rate of EVs will remain lower than rival continents for some time.

Looking at the long term, EV adoption rises steeply towards 2040 and clusters just short of 100 percent by 2050 in nearly all regions except Africa.

The rise of battery electric vehicle cars will also be the prime driver for battery demand in transportation. The combined new battery demand across all transportation segments is expected to grow 15 percent annually on average between 2020 and 2050, gradually rising from 0.23 terawatt hours (TWh) in 2020 to over 1 TWh already in 2024. From then onwards, growth will speed up and demand for batteries will exceed 4 TWh in 2030, toping 10 TWh around 2040 and plateauing around 14 TWh in 2050. Passenger cars will be, by far, the best market for new batteries, accounting for about 70 percent of total demand in the long term and for almost all demand till 2025. From that point of time, Rystad Energy expects battery adoption will start increasing in the heavy transport segment, with shipping and aviation only starting a low-level adoption from around 2030 onwards.

“In the shipping sector, the main applications for batteries will be for smaller vessels and auxiliary systems for larger vessels. This could change with major technological breakthroughs, for example within lithium-air batteries. However, this type of breakthrough does not appear to be imminent. Aviation is still at least 10-15 years away from a significant uptick in commercial electric flights,” says Marius Foss, senior vice president and head of global energy systems at Rystad Energy. 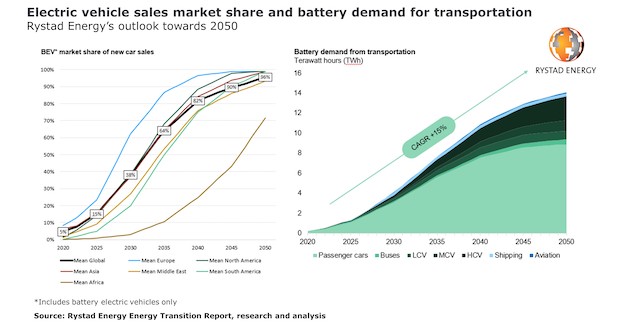 With each incremental drop in cost comes an incremental increase in batteries’ total addressable market. Batteries originally entered the power sector as an ancillary service, stabilizing the grid by providing a short burst of electricity, but they have proven to be more than just a back-up. In recent years, grid batteries have begun to disrupt the frequency control markets, eating into the market for peaker plants, and most recently, base load capacity in combination with solar and wind. If battery costs continue to decline at current rates, they will comprise an increasing share of the power market and can, together with cheap renewables, potentially displace a significant portion of the current fossil fuel baseload generation. This development will also provide cheap batteries for other parts of the energy system, including distributed and behind-the-meter batteries in buildings, as well as support the rapid electrification of the transportation sector.

The demand for batteries for grid storage is at the moment negligible but is expected to rise in the future. In 2025 we expect this segment’s demand to reach 0.4 TWh, and then demand will climb quickly to 2.7 TWh in 2030, gradually rising to its plateau of 10 TWh in the mid-2040s.

The report finds that there will be a 15-year lag before these EV batteries end up in storage, but it is natural to assume that a large share of the future grid storage demand can be met with repurposed EV batteries. Combining the two takes us to a future plateau of 20 TWh of new batteries needed across both sectors.