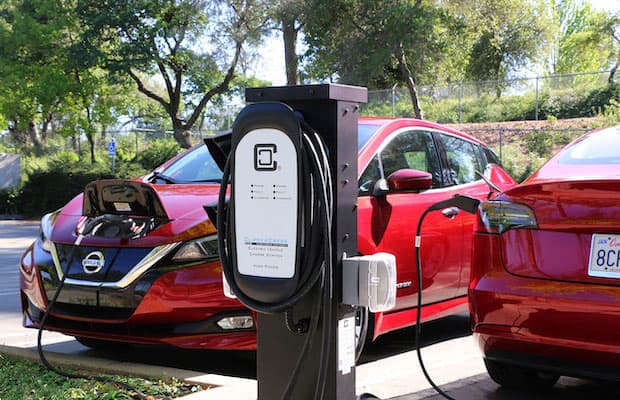 On behalf of the Australia Government, the Australian Renewable Energy Agency (ARENA) has announced $15 million in funding to Evie Networks to roll out the largest ultra fast battery electric vehicle (EV) charging network along Australia’s highways.

The funding will support the first phase of the $50.2 million intercity highway charging network with 350 kW ultra-fast chargers located along the ‘National Land Transport Network’ and beyond.

A total of 42 charging sites, all powered by renewable energy, will be installed at roadside service centres connecting Adelaide, Melbourne, Canberra, Sydney and Brisbane, plus destination charging in Far North Queensland, Tasmania and Perth. Construction will commence immediately on the first site north of Brisbane, with 23 sites to be operational in the first year.

Each of the 42 sites is able to charge two cars concurrently and will enable the typical EV available in Australia to charge 100 kilometres within 15 minutes using Tritium chargers. All sites will be open access with charging plugs suitable for all EV models available, including Tesla with an adaptor. The spacing of sites is designed to align with Australian geography, population areas, highways and to be well within the range of even the most affordable EV models.

“Evie’s fast charging stations across the country will help to increase the supply and adoption of electric vehicles by building the charging infrastructure in key areas along major roads. Reducing range anxiety will encourage EV uptake by giving motorists confidence they can get where they want to go – even on long road trips,” he said.

Last year, ARENA also committed $6 million for to Chargefox’s ultra fast charging network which will include 21 charging sites from Adelaide to Brisbane, around Perth and in Tasmania.

“Both networks will provide complementary coverage along major highways connecting capital cities, and both will be powered solely with renewable energy,” Miller said.

Last year ARENA and CEFC published a report which predicted the uptake of EVs would increase significantly in the next decade. The report said EVs would reach price parity with petrol cars by the early to mid-2020s when looking at the upfront cost, and sooner than this on a total cost of ownership basis. A lack of fast charging infrastructure was identified as a barrier to the uptake of EVs.

“EVs could play a huge role in the future, allowing renewables to power our cars. This could reduce fossil fuel consumption from transport and reduce the cost of car ownership,” he said.

Evie Networks’ CEO Chris Mills said that they have estimated that Australia needs around 350 sites to cover all the highways that make up Australia’s National Land Transportation Network.

“While many consumers will charge at home, they will also need plenty of fast chargers in towns, suburbs and cities. There are currently around 6,500 petrol stations. This is just the beginning of the infrastructure build-out.”