In its monthly energy transition report, Rystad Energy has found that Asia, is, and will remain the mother of batteries over the coming decade.

The report details that the world’s current total battery cell production capacity is about to exit 2020 at around 617 gigawatt-hours (GWh) per year. Most of this capacity, 516 GWh, comes from producing facilities in Asia. Europe follows with 61 GWh and North America with 40 GWh of production capacity.

Existing sanctioning is set to create a boom in capacity for Europe and North America towards 2025, while Asia’s capacity is also set to expand, dwarfing other continents, and securing its place as the ‘mother of batteries’. In 2025, Asia’s production capacity is set to double to around 1 terawatt hour (TWh) per annum. Europe will follow with around 0.33 TWh and North America with around 0.14 TWh. 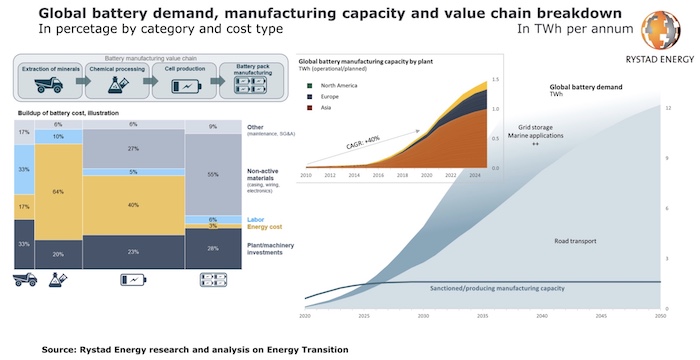 The report then goes on to add that currently, the world’s battery cell producing capacity by far exceeds global demand, which is limited to around 140 GWh per year. However, as the electrification of road transport accelerates and with added battery demand from grid storage projects and marine applications, the world is now ahead of a ground-breaking demand boom, which will already create a battery cell supply shortfall from 2026, unless more production projects are sanctioned globally.

It forecasts a balanced battery cell market in 2025, with both supply and demand at just under 1.5 TWh per year. Demand however, will continue to grow going forward and is forecast to reach nearly 2 TWh in 2026, adding even more in the following years. Unless more battery cell production projects are sanctioned globally, the world is in for a deficit and buyers will have to compete for limited supply.

As per the forecast, road transport demand for battery cells alone will reach nearly 12 TWh per year by 2050.

At the price point of battery cells, the report states that given the trajectory of battery prices over the past decade, it would be easy to assume that this decline will eventually flatten out.

The report authors believe that this claim is further substantiated by the fact that the cost of raw materials represents an increasing share of the total cost for battery cell manufacturers, and currently stands at 50-60 percent of the cost of goods sold (depending on chemistry and form factor). “One might think this leaves limited room to further improve economics. But if we expand the analysis to look at the various cost components of the entire value chain for batteries, we might arrive at a different conclusion.”

Looking across the entire value chain, the report finds that 34 percent of the cost of battery production is tied to energy consumption. And most of this involves electricity used for drying operations in the chemical processing and cell production phases. With new and improved techniques, these costs could be vastly reduced – a potential that will likely soon be realised in cell manufacturing. Additionally, it expects a shift towards more vertical integration in the battery industry, with battery producers moving upstream in order to better optimise the mining and processing part of the value chain.

As both battery cell and battery pack designs become more specialised and optimised for their intended applications, there is also the potential to reduce expenses related to non-active materials, to cut labor costs through automated manufacturing processes, and to reduce up-front investments through enhanced production facility design.