Andhra Pradesh has become the latest state to come out with an EV policy that seeks much more than more EV’s on the road by 2024.  The state’s new EV policy hopes to attract an investment of Rs 30,000 crore and create 60,000 jobs in electric vehicles (EVs) manufacturing. All this, while getting a million EV’s registered in the state by 2024. The state, which has been high on announcements in the recent past, discussed these plans at a meeting with the Niti Aayog. These discussions follow the state’s EV policy announced in August this year when there was also talk of building a gigafactory for battery manufacturing in the state. 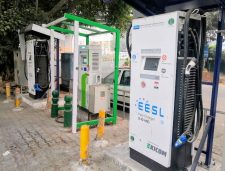 Among the many suggestions to kickstart state plans is the plan to establish a Centre for Advanced Automotive Research, to foster advanced research in chemical, mechanical, electrical and electronics engineering.

While we have seen market-driven action on the B2B transportation segment already, the state also hopes to convert its public bus transportation sector to EVs, with the complete fleet of AP State Road Transport Corporation to be  EVs by the year 2029. The state transporter currently has a fleet size of over 11,500 buses. In fact, all government vehicles in the state would be converted to EV by 2024, according to an official who attended.

A Centre for Advancement of Smart Mobility has also been proposed on a 100-acre site with a test track for all new EVs and autonomous vehicles.

The state government has shared plans to phase out fossil fuel-based vehicles in the top four cities Visakhapatnam, Vijayawada, Tirupati and Guntur) by 2024 and all cities by 2030. We understand that the reference here is to the fresh registration of such vehicles.

Plans are also in the works for installing one lakh EV charging stations by 2024. The center was asked for its support in installations at national highways passing through the state. Details have not been shared on government incentives, subsidies, or similar support for the policy as yet.