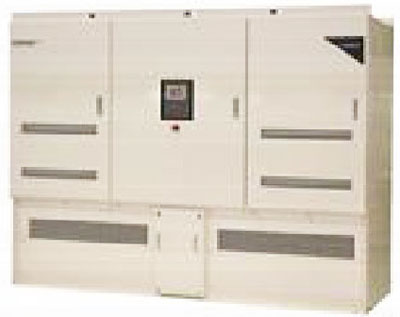 Product Brief: Toshiba Mitsubishi-Electric Industrial Systems Corporation (TMEIC) has developed and commenced sales of its SOLAR WARE 2220/2550 PV Inverters for large-capacity solar power systems. The new inverters are the 1500V series indoor inverters with a single unit capacity of 2222kW and 2550kW, respectively. With the latest development of its 1500V series of PV inverters realizing the world’s highest level in terms of compactness along with conventional high conversion efficiency, product quality and cost competitiveness, TMEIC continues to contribute to maximizing customer benefits as an industry leader.

Product Feature: SOLAR WARE 2220/2550 PV Inverters operate without de-rating at a surrounding temperature of up to 50°C. They have a reactive power compensation function to stabilize a power grid during nighttime hours. The inverters are rated in world’s highest level in terms of compactness by increasing AC output capacity per installation space by 2.76-fold compared with conventional model Realized 7.6% reduction in size compared with conventional large-capacity model and AC output capacity increased to 1.4MVA/m2.