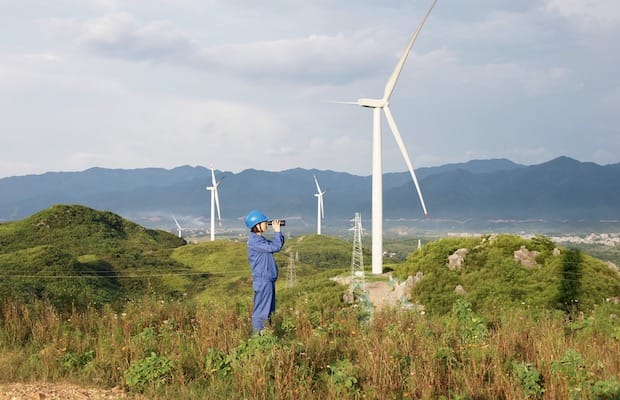 Western turbine OEMs are struggling to compete amidst intense turbine pricing competition as China moves towards wind grid parity targets by 2020. It has been reported that in the 6 GW auction for wind power in Ulanqab, Inner Monongalia held last month, the three western wind turbine manufacturers, namely GE, Siemens Gamesa, and Vestas, failed to take a single bite of the total.

The project, which is the world’s largest in wind capacity, is being developed by SPIC, one of China’s top state-owned power producers. Chinese companies SEWPG (SEwind), Goldwind, CSIC Haizhuang, Mingyang and DEC all won wind turbine orders from the auction.

Commenting on the bidding results, Xiaoyang Li, Senior Analyst at Wood Mackenzie was not surprised. “The preference for local Chinese manufacturers and premiums of up to 40 percent in bidding pricing prevented them [western OEMs] from winning,” Li said.

The bidding set the entry-level high by including some key requirements such as global ranking (OEMs must be in the top 15) and a track record of 800 MW in 2018 alone. Among 14 bidders, 11 were qualified, including the three western OEMs.

“This nation-level project is the first subsidy-free national wind base in China, and the power price is equal to Inner Mongolia’s coal power price (~283 RMB/MWh). That said, the developer prefers Chinese SOEs as they have a better ability to take long-term project risks compared to private and western companies.,” Li added. Envision, which is China’s second-largest turbine OEM, also failed to make it to the winner list.

The absence of western OEMs in the world’s largest wind farm brings up many questions on how they could grow presence in China’s wind power market, or whether they are in terminal decline. Western turbine OEMs in the Chinese market are faced with growing challenges, according to new research from Wood Mackenzie Power and Renewables.

Vestas, GE, and Siemens Gamesa are now the only three non-Chinese manufacturers vying for market share, while several others have exited for various reasons. The combined market share in China for these three majors fell to just 5 percent in 2018. Vestas gained 2.9 percent market share, the highest of the foreign OEMs.

Under the backdrop of transitioning to an auction mechanism and wind grid parity targets by 2020, “Chinese owners are paying more attention to lower CAPEX and near-term project IRR. That said, the average pricing gap of 5-40 percent really makes a difference,” Li said.

Technology advantages such as a higher utilisation rate and better long-term performance do not bring many advantages for western OEMs in the Chinese market because dispatch hours are set by grid companies rather than in a competitive wholesale market. In addition, wind curtailment is a major problem that remains to be resolved.

The Chinese wind market is expected to install 237 GW of new capacity by 2028, making it the largest market globally with many opportunities ahead. The whole value chain, from project development to turbine supply, from EPC to O&M, will mature in the long term. Given the existing policy conditions and competitive landscape, western players will be increasingly challenged to gain market share against local competitors.

Yamaha, Honda, KTM, and Piaggio Team Up to Create Swappab...