The US solar industry employed 231,474 workers in 2020, a 6.7% drop in jobs from 2019 due to pandemic restrictions and increased labor productivity

The U.S. solar industry employed 231,474 workers in 2020, a 6.7 percent drop from 2019 due to pandemic restrictions and increased labor productivity, according to the National Solar Jobs Census 2020 released by the Solar Energy Industries Association (SEIA), The Solar Foundation, the Interstate Renewable Energy Council (IREC), and BW Research.

Less labor-intensive utility-scale installations contributed to a record amount of solar capacity added in 2020. However, the pandemic took a toll on residential jobs in the summer, and those jobs did not fully recover by the end of the year.

The new figures come as lawmakers debate infrastructure spending that could boost the solar workforce with hundreds of thousands of jobs over the next decade. SEIA analysis shows that the solar industry will need to reach more than 900,000 workers to reach President Biden’s 2035 clean energy target. SEIA is advocating for policies that will grow clean energy deployment and lay the groundwork to hire and train those workers. 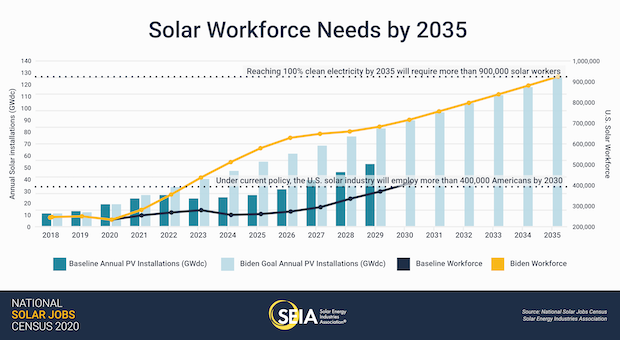 “The solar industry continues to support hundreds of thousands of jobs across all 50 states, and even during a pandemic, our companies largely were able to keep workers on the job,” said Abigail Ross Hopper, president and CEO of SEIA. “We now have an opportunity to quadruple our workforce, adding diversity and supporting underserved communities by taking policy steps that incentivise solar and storage deployment and provide long-term certainty for solar businesses.”

Notably, the report shows that the US solar industry has a unionization rate of 10.3 percent, which is substantially more than previously estimated and comparable to the economy-wide rate.

The report also shows an increase in solar workforce diversity across nearly every demographic category, including workers identifying as “female,” which now represent 30 percent of the solar workforce.

Tags: 2020, International, market research, SEIA, Solar Industry, US, US Solar Industry in 2020
"Want to be featured here or have news to share? Write to info[at]saurenergy.com