The Case for the benefits of Rooftop Solar for Discoms

Energy and environment think tank, The Energy and Resources Institute (TERI) recently published an article  highlighting the positive impact rooftop solar can have on the countries struggling discoms, which have arguably been among the leading causes for the slow adoption of solar rooftop solutions. 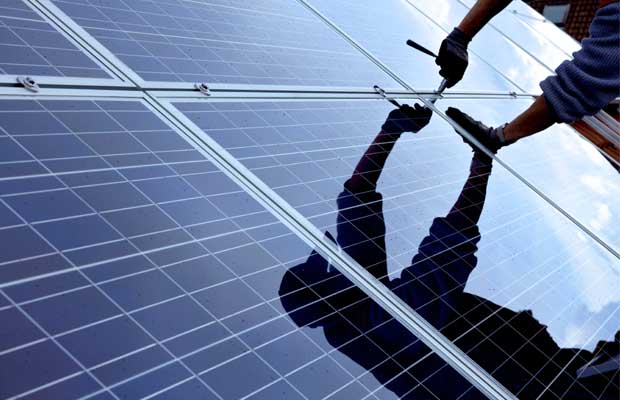 India has committed to 175 GW of Renewable Energy by 2022. An ambitious target which is often appreciated for the initiative, but beyond optimism and approach, the target seems increasingly distant ending a drastic change in policy and intent. For instance, total solar installations in 2018 of 8.3 GW actually fell below the 2017 figure of 9.7GW. That leaves a huge bridge to 100GW, the solar target for 2022. Of which rooftop itself is supposed to be 40GW.

There has been a dramatic growth in this sector with the falling capital cost of installation leading to solar tariffs reducing significantly over the years. While the solar PV industry in itself has seen overall growth, the rooftop solar PV segment has seen insufficient growth in order to achieve the set target. Of the 40 GW to be installed by 2022, only around 3.86 GW had been installed by December 2018.

This slow growth can be attributed to multiple reasons, the most pressing issue among them, however, is that some distribution companies’ (discoms) are inhibiting the promotion of solar PV systems, fearing revenue loss. These discoms also anticipate technical and operational challenges from such systems. Further, due to the small size of solar rooftop projects and issues of payment security, financing for these projects is not available easily.

Take for instance the situation in Karnataka. India’s top state in terms of installed solar capacity has halted the building of new solar energy projects. The Karnataka Electricity Regulatory Commission (KERC) reportedly observed that the discoms have been contracted to procure enough solar PV power to meet their renewable purchase obligation (RPO) for the next two financial years after FY 2019-20. The commission also noted that at present, many DISCOMs are defaulting on payments towards power supply by renewable energy generators due to cash flow constraints.

However, the solar rooftop systems are actually quite beneficial to the very discoms wary of them.

Key firms across Industries, which are their most lucrative and dependable customers for most discoms, are already moving to the open-access system to buy cheaper electricity, irrespective of rooftop solar PV coming into the picture. Discoms incurring high Aggregate Technical & Commercial (AT&C) losses due to a large amount of rural/non-paying consumers would be affected the most by this transition as they would lose a significant share of their revenue stream. If these open access consumers shift to rooftop solar for their electricity needs, the electricity demand of utilities would drop. The discoms then would not need to buy expensive electricity from the open market to meet their peak demand. Thus, promoting such customers to go solar would be in their best interests.

Motivating low-paying consumers (who are mostly residential) to install rooftop solar at their premises can also help the distribution utilities offset the cross-subsidy burden to some extent. Currently, this is being practiced only by some discoms in the country. One such example of that is the Solarise Dwarka initiative by BRPL and supported by GIZ, TERI. As a result of this initiative a 100-kW grid-connected rooftop solar plant – the first plant to be installed under the initiative – was inaugurated at the Shiv Bhole Cooperative Group Housing Society in Sector 7, Dwarka on May 4, 2018.

Each of the 60 flats will save around Rs 4,500 annually in their electricity bills, while the solar plants will be able to offset around 32 percent of a resident’s annual carbon emission. And developed on a RESCO model, BRPL assumed the role of the moderator at no installation cost and a tariff of Rs 2.66/kWh, around 2.40/kWh less than its own generic tariff.

Motivating consumers to install rooftop solar will benefit both the consumers and discoms (as seen in the previous case), especially in areas where the solar tariff is lower than utility tariff. Ultimately, the discoms will be able to retain all their customers.

Rooftop solar PV systems can also help reduce commercial losses, especially among rural/ non-paying consumer categories. Additionally, such systems installed on the rooftops of consumers, who are non-obligated entities, would also help discoms meet their renewable purchase obligation (RPO) targets and in turn claim the benefits of the same. As there would be less power flowing through the distribution network, network congestion and loading would also come down, thereby reducing the network burden. This, too, would help the utilities defer some of their capital expenditure as the infrastructure would last longer, and reduce operation and maintenance expenditure. 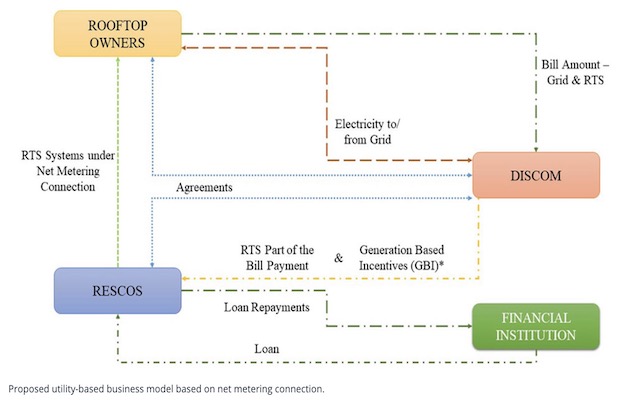 For Discoms to promote the use of rooftop solar PV systems and make the best use of the same, TERI proposes a ‘utility-based’ business model. It is based on demand aggregation and agreements between various parties, keeping the utility as the ‘key-anchor’ party for the implementation in their licensee areas. Much like the Solarise Dwarka initiative by BRPL.

“Rooftop solar PV systems benefit discoms by reducing their technical, financial and operational burden. They thus need to undertake a more anchoring role in the implementation of solar rooftop projects within their licensee areas. Looking into more innovative approaches in rooftop solar implementation, such as discom-based business models, consumer-targeted awareness, and demand aggregation can help utilities overcome any challenges faced in promoting rooftop solar. This would not only help them but would also be beneficial to all stakeholders involved in the sector. This might provide the sector the kind of push required to achieve its targets and also avail the benefits of a clean form of energy,” the article stated.