Oorja Development Solutions, a spin-out company from Imperial College London, is the winner of the Cisco Global Problem Solver Challenge. 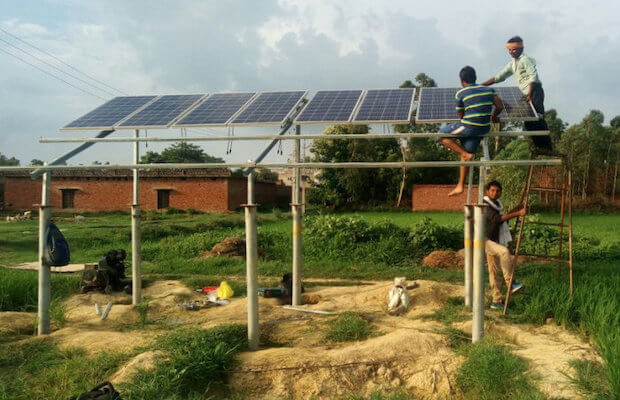 Oorja Development Solutions, a spin-out company from the Imperial College of London was awarded $100,000 for winning the Cisco Global Problem Solver Challenge.

The social enterprise, co-founded in 2016 by Dr. Clementine Chambon of the Department of Chemical Engineering, and social entrepreneur Amit Saraogi, was named the grand winner of this year’s competition for its work developing and operating pay-as-you-go community solar pumping systems in rural India.

A total of 335 teams competed for a total of US$330K in prizes, and for recognition of their work to address some of the current global challenges using innovations in technology.

The company is attempting to tackle energy poverty in rural farming communities by installing energy systems to power livelihoods. In the irrigation sector, they provide irrigation as a service, as an alternative to expensive and unreliable diesel irrigations pumps which place a large financial burden on farmers who often cannot afford to invest in alternatives.

Solar pumps are virtually free to run once they’ve been installed and water is available year-round, which enables farmers to plant a greater diversity of crops and can help boost their yields by up to 50 percent.

Since their inception, Oorja has run three successful community solar pump pilot projects in Uttar Pradesh.  They now plan to launch the service in Assam and have launched a crowdfunding campaign to support the project. They have currently reached 55% of their funding goal, and the campaign will remain open until the end of June.

In May, Government-owned Energy Efficiency Services Limited (EESL) issued a tender to procure 272,579 solar water pumping systems on behalf of the member countries of the  ISA. The last date or submissions is  July 1, 2019. Over 90% of the pumps are meant for countries in Africa, with the Democratic Republic of Congo (80,000), Benin (50,000) and Sudan (50,000) taking the major share.