Home » News » Vidarbha Farmers in Maharashtra to Get 3900 Solar Pumps

Vidarbha Farmers in Maharashtra to Get 3900 Solar Pumps 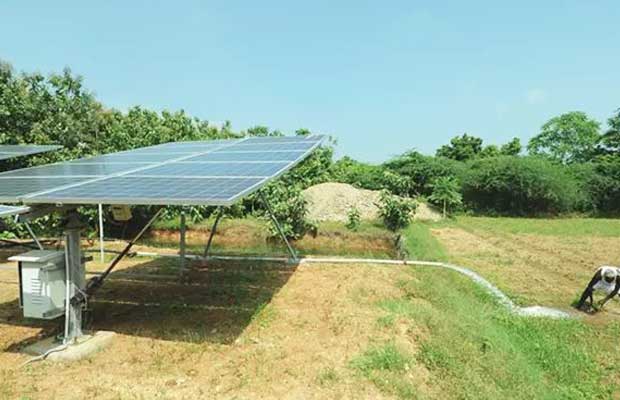 According to Maharashtra State Electric Distribution Company Limited (MSEDCL) official, over 3,900 farmers will get the pumps soon. Around 50 of them have already been provided these pumps after the code restriction was lifted.

MSKY was started by energy minister Chandrashekhar Bawankule, who has focused a lot on solar energy. With solar power costs going down he is promoting it in a big way.

An official in MSEDCL said that 38,624 farmers had applied for solar farm pumps in the eleven districts of Vidarbha. The highest number of applications were submitted in Washim district — 7,500, while Wardha is the lowest at 1,649. The discom has so far approved 23,169 applications and issued demand notes to 6,520 farmers. Of these, 3,911 have already paid the money and will soon get the pumps.

In Nagpur district, 2,605 farmers had applied for the pumps. The company has till now cleared applications of 2,027 and issued demand notes to 721. Some 523 farmers have already paid the money.

The official further said, “If a farmer wants a 3 HP solar pump, he has to pay Rs16,560, which is 10% of the actual cost. If the farmer belongs to SC or ST communities then he has to pay only Rs8,280 (50%). The amount for 5 HP is Rs24,710 for general and Rs 12,355 for SC/ST. If a farmer had applied for a conventional farm pump connection and had paid some money for it then he will have to pay only the difference.”

According to the official, the scheme is on a first-cum-first-served basis. “The farmer who pays his 10% contribution first will get the connection first. We, therefore, appeal to agriculturists to pay the money immediately after receiving the demand note,” he added.

Bawankule has been promoting solar farm pumps as the owners get uninterrupted supply during the day. As the farmer is not billed, he is not required to be cross-subsidized by other consumers. This will ultimately lead to a situation where lower power tariff hikes are required for other consumers.

The decision was taken in March after concluding the installation of 25,000 solar pumps in the first phase. Because of huge response, MSEDCL plans to install more than one lakh solar pumps will be installed throughout the state in the second phase.