Kahramaa has announced the successful financial closure for the Siraj-1 solar power plant project, the first of its kind project in Qatar 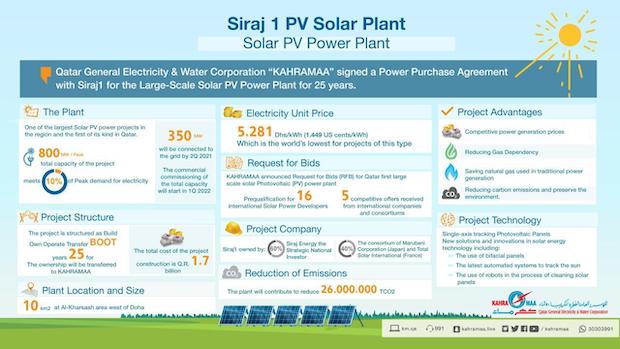 Qatar General Electricity and Water Corporation (Kahramaa) has announced the successful financial closure and completion of all needed financial arrangements with its international financiers for the Siraj-1 solar power plant project, the first of its kind in Qatar to produce electricity using photovoltaic cells with a capacity of 800 MW.

The project’s company (Siraj-1 Company) has obtained the senior loans, which had been provided by Japan Bank for International Cooperation (JBIC) and Mizuho Corporate Bank to finance the plant.

After the project’s financial close, the Levelised Electricity Cost (LEC) was set at 5.281 Dirham (1.449 US cents) per KW/h, which was the lowest price in the world for solar PV projects for a while when the consortium of Total (49 percent) and Marubeni (51 percent) had entered into agreements for the development of the project, which it had won in the country’s first solar tender.

“Achieving this competitive price is evidence for the trust of the investors and developers in the Qatari market as well as implementing the latest and most innovative engineering solutions to build and operate the solar plant,” the firm stated.

Kahramaa had signed the agreements of the Siraj-1 large-scale solar power plant to produce electricity using photovoltaic technology. According to the agreements, Kahramaa, which is the owner and operator of the transmission and distribution system of electricity and water in Qatar, will purchase the electrical energy produced from the plant, while Siraj-1 must construct and operate the project.

Siraj-1 Company is owned by Siraj Energy (60 percent) and a consortium of Japan’s Marubeni Corporation and France’s Total Solar International (40 percent). The project will be constructed, owned and operated for 25 years. Then, the assets will be transferred to Kahramaa according to the system of Build, Own, Operate, and Transfer (BOOT) that is known globally, committed to the principle of public and private partnerships as well as to encourage foreign investments in major projects.

The project will be constructed with a total cost of 1,7 billion Qatari Riyal (USD 467 million) at a 10 square kilometer land plot in Al Kharsaah area west of Doha that has been allocated for Kahramaa.

The plant will have a total capacity of 800 MW which equals about 10 percent of Qatar‘s current peak electricity demand. 350 MW will be linked to the grid as a first phase in the second quarter of 2021. The commercial commissioning for the total capacity will be in the first quarter of 2022 in order to achieve the announced strategic objective of National Strategic Development 2018-2022.

The plant contributes to reducing around 26 million tons of emissions during the project period and will support Qatar’s commitment to host a carbon-neutral FIFA World Cup. This also comes in line with one of the objectives of the National Program for Conservation and Energy Efficiency “Tarsheed”, represented in reducing at least one million tons of emissions annually until 2022.