With an aim to achieve its target of 23 percent renewable energy share in the energy mix by 2025, Indonesia is planning to replace its old fossil fuel plants with renewable energy, as per the data and analytics company report. 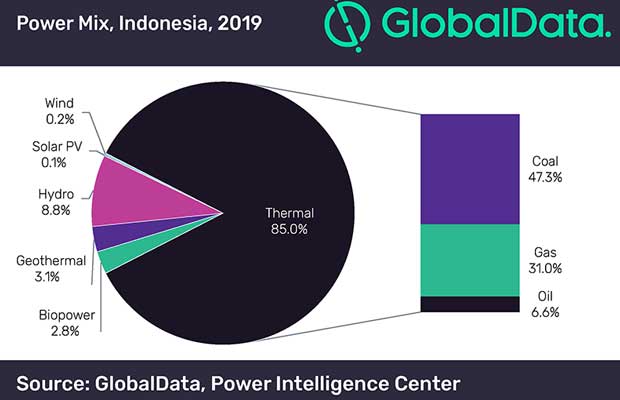 The country, which is mainly dominated by thermal power generation, has renewable energy potential of over 400 GW. However, currently, it is utilizing much less for power generation purpose.

According to GlobalData report, around 85 percent of the total power mix is contributed by thermal technology.

These days, all renewable energy projects in the country are developed under the build, own, operate and transfer (BOOT) scheme where PT Perusahaan Listrik Negara (PLN) is the sole distributer of the electricity produced.

It further said that, the government has also announced to make changes to its existing thermal power fleet to meet the renewable energy target of 2025. It will convert existing fossil-based power plants that produce carbon dioxide emissions with more environment friendly renewable energy plants.

He further added that “the acceleration in renewable energy installations will happen only if the government amends existing regulations for which it has already started renegotiations on the renewable energy electricity prices with the developers. The country being major coal exporter with around 50 percent of its electricity needs being served by coal-fired plants will have to have a make a tectonic shift in its generation fleet. So, with this announcement, the government has adopted two pronged approach to achieve its renewable energy target by 2025.”

Tags: GlobalData, International, power generation, Renewable Energy
"Want to be featured here or have news to share? Write to info[at]saurenergy.com