Scientists in Japan have developed a fully planar device that converts sunlight into a laser beam, which can efficiently power hydrogen fuel generators.

Solar-pumped lasers convert sunlight into laser beams, which can be used to produce hydrogen—a clean type of fuel that can help to tackle the current environmental crisis. But, these lasers usually require bulky optics and solar-tracking systems, which makes them inconvenient. Now, with the new developments and with its thickness of a few millimetres and great scalability, this design breakthrough may herald the widespread adoption of eco-friendly solar-driven lasers.

In spite of some progress in this field, all existing solar-pumped laser devices require large lenses or mirrors to concentrate as much sunlight as possible into a small area. In fact, the minimum threshold of solar light intensity that can generate a laser in existing devices is approximately 10,000 times that of natural sunlight. In addition to the sheer bulkiness of the telescope-like lenses needed, complex solar-tracking mechanisms are required for these devices. To make things worse, these lasers cannot use diffuse sunlight, meaning that they would not work on cloudy days at all. These serious limitations have greatly hindered the adoption of solar-pumped lasers. 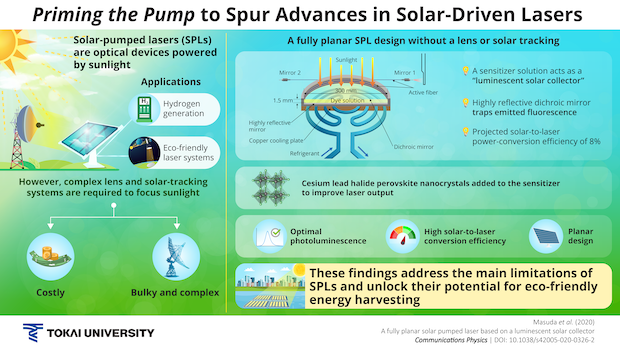 Fortunately, in an effort to revolutionise this field, a team of scientists from Toyota Motors and Tokai University, Japan, led by Dr. Masamori Endo, have recently published a study in Communications Physics on their latest development: a fully planar solar-pumped laser. This solar-pumped laser does not require complex light-concentrating systems and—by virtue of being fully planar and having a thickness of only a few millimeters—can be easily deployed like traditional solar cells.

So, how does this novel design work? It mainly relies on a nearly flat cylindrical chamber called “luminescent solar collector.” The inside of the chamber is highly reflective and contains a solution called “sensitizer.” A coiled kilometer-long laser fiber is submerged in the solution, and the top of the chamber is a dichroic mirror. Solar photons (or light particles), which have a wide range of frequencies, enter the chamber through the dichroic mirror and are absorbed by the sensitizer, which re-emits them with a specific frequency through photoluminescence. These photons are now reflected by the dichroic mirror and are therefore trapped within the chamber. They eventually hit the laser fiber and excite it, collectively producing the required oscillations that generate a laser beam.

This approach, which represents a complete overhaul of existing solar-pumped laser designs, was tested experimentally. Although the first results were unsatisfactory as the output power of the prototype was too low, Dr. Endo and his team knew they were onto something exciting. In a subsequent study, published in the Journal of Applied Physics, they tried to improve upon their initial design by replacing their previous sensitizer with cesium lead halide perovskite nanocrystals, which they chose because of their advantageous optical properties. By tailoring the composition of the perovskites, they tuned the energy of the photons emitted via photoluminescence to match the optimal one required to excite the atoms in the laser fiber. This new prototype device yielded better results and provided relevant insight into the physics at work within the planar solar-pumped laser.

Dr. Endo also said that a solar-pumped laser without concentrator optics sounded like a very futuristic concept when he began his research. Now that it is becoming a reality through much effort, various advanced applications are plausible.

He concludes, “Direct energy transfers from space to remote areas could be a practical solution for power shortages. Of course, they can also be used as a power supply for outer space exploration.”