When the Delhi government announced its first ever solar policy in 2015, the target was 1000 MW by 2020, and 2000 MW by 2025. Call it inexperience, lack of focus, or a rapidly changing policy environment, but the state is nowhere close to, or even on the path to, those ambitious numbers. The Delhi government always faced a trickier challenge on its numbers, thanks to the almost complete dependence on rooftop solar rather than utility scale solar, due to lack of land. Rooftop solar, as we all know, has really struggled everywhere, for multiple reasons. However, if any city could, or should  overcome those challenges, it should have been the national capital, that faces the scourge of pollution from thermal power like few others. 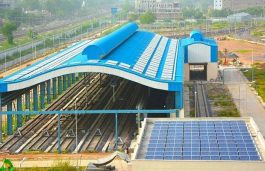 Help, in fact has come from unexpected quarters, like the Delhi Metro Rail Corporation (DMRC). The city’s metro network operator installed a 500 KW solar plant at its Dwarka Sector 21 station back in 2014, and has plans to install solar plants at all of its 275 odd stations by 2021. That will easily make it the largest single solar owner in the capital, with close to 60MW of installed capacity potentially. Currently, the number stands at 28 MW.

Interestingly, the metro also sources 27 MW solar power from the Rewa Ultra Mega Solar Limited in Madhya Pradesh, (RUMSL), enabling it to use solar to run actual trains, rather than just auxiliary services at its stations. Take away the metro numbers, and solar in Delhi is just an experimental source, being tried with no seriousness.

For Chief Minister Kejriwal, who called for a mass movement for solar while inaugurating a solar plant at Delhi University’s Lady Irwin College earlier this week, the 218 kWp Solar Power Plant should make it clear where the future lies. In large institutions and buildings. While the capital lacks the sort of open, available land that most other states can provide, Delhi does have developed infrastructure and buildings that together offer a great opportunity to deliver on his promise of building a solar capital. The Delhi government has already made progress in installing solar plants at its many schools, for instance. Almost 100 plus should have had the plants by now, going by government announcements in the past.

The same zeal, if repeated for the many colleges across the city, besides its own buildings and institutions, could easily deliver a major boost to its solar ambitions. The governments own estimates claim that Delhi is blessed with almost 300 sunny days and the rooftop space available for solar panels is estimated to be 31 sq. km, giving the city state a solar energy potential of 2500 MW.

A reasonable transmission system and grid also means that unlike many other states, Delhi should not have as much of a problem of grid integration as other states, at least on paper. With peak power demand approaching 8000MW in summers and 6000MW in winters, the capital is well within limits to add a further 300-450 MW of solar power to its grid system. A figure of just 130 MW is a very poor reflection of both intent, and execution.

Residential solar users we spoke to have been uniformly common in their views, on the sheer apathy of the city discoms for solar rooftops, especially for smaller capacities. The process has been long, slow, and stuck in red tape. With the city deciding to pretty much ignore the Corona pandemic now, the excuse of  delays caused by the virus also need to end.