Undoubtedly, the most important economic event of the year going to take place on February 01, 2020, when the Finance Minister Nirmala Sitharaman tabled her second Union Budget in the Parliament. It is widely expected that the main focus of the Narendra Modi 2.0 government will be on again kick starting the engine of economic growth, which have dampened many years low. 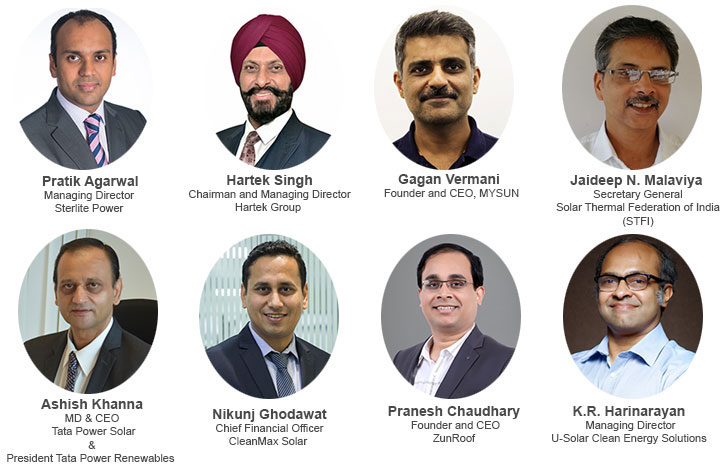 Ahead of the Union Budget, the solar industry leaders have limited hopes from the Finance Minister. Clarity on GST rates, ensuring better policy framework, schemes for boosting financing and investment environment for the sector, a scheme for relieving Discoms (power distribution companies) distress, scheme for boosting Make in India, rooftop solar and MSMEs among others figure in the wishlist we gathered.

In fact discom distress, thanks to its impact across the energy chain today, is clearly priority no. 1 for most. Power Minister RK Singh has already hinted that there will be some announcement related to the revival of Discoms distress in the upcoming Budget 2020.

Taking a cue, Pratik Agarwal, Managing Director, Sterlite Power, global developer of electric power transmission infrastructure and electric utilities solutions provider, commented that “a USD 5 trillion economy would mean a GDP per capita of about USD 3,000. This can only be possible if the industry is fueled with 24X7 uninterrupted power, at a per unit cost that is comparable to that of China. In this budget the focus needs to be on large scale reform in the ailing power distribution sector, with privatisation and competition being two key themes of any such reform. In addition to this, pension and insurance money needs to be channeled towards infrastructure assets so that developers can recycle their capital and use it towards creation of greenfield assets. This is the much needed impetus in infrastructure financing in India.”

While making a strong case for the transmission and distribution (T&D) sector, Hartek Singh, Chairman and Managing Director, Hartek Group, an energy conglomerate, expects that “with the government likely to set the ball rolling for its ambitious Rs 2.86 trillion scheme for power distribution reforms on the Budget day, we expect a higher budgetary allocation for the T&D segment and a slew of policy measures to expedite the upgrade of both inter-state and intra-state transmission network for the evacuation of renewables.

The government should give impetus to renewables by exempting solar and wind energy equipment and installations from GST. It should announce financing schemes for the renewable energy segment at concessional rates of interest. Concessional credit through green bonds can go a long way in boosting solar capacities and developing green transmission grids.

So as to make the cost of renewable energy more competitive, the government should offer exemptions from cross-subsidies and transmission charges. Proceeds from the clean energy cess should be used to promote electricity generation, particularly renewable energy.

We also expect the government to tap the immense potential of rooftop solar by creating a more conducive environment for investments through an enabling regulatory framework, a single-window system for procedural approvals and favourable net metering regulations.”

Focusing on the challenges being faced by the developers or manufacturers in the MSME sector for solar, Gagan Vermani, Founder and CEO, MYSUN, a rooftop solar company, suggested “Budget 2020 should focus on improving the credit flow to the SMEs, more importantly for the solar or clean energy related investments. As the safeguard duty regime on solar panels is coming to an end in July, the government should ensure that it does not heed to calls for imposing custom duty. The import trend for the last two years has proved beyond doubt that the duties have failed to make any significant impact to the domestic manufacturing.

With all the chatter around pollution and energy security, we hope the government does its bit to help reduce the cost, and improve access, of solar energy to the end consumers and thereby usher in a true solar revolution.”

In line with Vermani’s suggestions, Jaideep N. Malaviya, Secretary General, Solar Thermal Federation of India (STFI), a not-for-profit organization promoting solar use especially solar water heating, is of the view that “there is a dual GST rate on solar energy systems split as 5 percent GST on 70 percent of net cost as equipment and 18 percent GST on 30 percent of net cost as installation and services which is not justifiable for smaller projects like rooftop photovoltaic (PV) and solar water heaters. There should be an implementation of single 5 percent GST rate without any bias.”

On boosting Make in India for the domestic solar manufacturing industry and making India Inc globally competitive Malaviya further suggested that “with solar energy components’ import rising, additional funds should be allocated to incentivize domestic manufacturing so as to make them competitive globally. This is besides safeguard duty, which is likely to be re-imposed after expiry this year.”

Agreeing with Malaviya’s views on Make in India, Ashish Khanna, MD & CEO, Tata Power Solar and President, Tata Power (Renewables), renewables arm of utility giant Tata Power Company, further suggested that “the industry expects some clarity on the GST for solar projects. There should be an incentive for developing next-generation solar panel manufacturing technology in India as well as investing in storage & hybrid projects. We must wield more advantage of the technological edge that India can provide and power for neighboring countries like Bhutan, should be treated fully so that these hybrid projects support grid stability and acts like pump storage. Another important aspect is policy initiatives so that payments against renewable power supplied to the state distribution companies (Discoms) can be secured as per timelines specified by the agreement. In my view, Renewables will be India’s next IT provided the government incentivizes the industry through a policy framework. We expect to see the budget to give impetus to funding, investment and incentivize technology for manufacturing and further proliferation of renewable energy across the nation.”

While expecting some financial stimulus for the solar industry Nikunj Ghodawat, Chief Financial Officer, CleanMax Solar, which operates largely in the commercial and industrial (C&I) segment, said “renewable, like any other infrastructure business, is capital-intensive and availability of funds at competitive price is an important ingredient for growth. While the RBI has brought down the repo rates periodically, it hasn’t been translated to the banks passing on the benefit to the end customer. Add to this, the tight lending environment on liquidity front – there are a handful of financial institutions doing fresh project finance. This needs to change soon to uplift investment and confidence in the industry. Additionally the removal of capping in the priority-sector lending limit for rooftop solar projects will ensure higher credit financing and give a much needed boost to the sector.”

Ghodawat also expect that “the government should also focus on implementing the amendments in the Electricity Act of 2003 with a focus on accelerating open access policies, privatisation of Discoms and separating content & carriage, to address many of the challenges and inefficiencies prevalent within the power distribution sector. This will eventually reduce the energy cost burden on the end consumer and improve the financial health of Discoms.”

“Further, a comprehensive Credit Guarantee Mechanism promoted by the Government or perhaps, a multilateral agency for MSMEs with a credit rating below ‘A’, would be a welcome step. This would throw open the rooftop solar market to a multitude of small businesses, creating a huge market and would also bring down electricity costs for these companies,” Ghodawat added.

Stressed on the need for quick reforms for the rooftop solar sector which is lagging behind in the race for 2022 targets, Pranesh Chaudhary, Founder and CEO, ZunRoof, a residential solar rooftop company, said “in an ideal world, a clean energy product like solar rooftop should be GST free. If not, at least the current product to service ratio (70:30) in GST calculation needs to be restructured (90:10). Secondly, a dedicated policy for single window approval of solar rooftop projects is required for commissioning to be executed at a fast pace. Besides, supplier prices have come down to a level where subsidies should now be eased out.”

On the flip side, K.R. Harinarayan, Managing Director, U-Solar Clean Energy Solutions, a solar EPC and developer company, didn’t expect much from the Budget for the solar industry and expressed his concern by saying that “given the pressure on the government to raise revenue and reduce subsidies, we don’t expect any special incentive for the Solar Sector this year. In any case, the Solar Sector is able to stand on its own feet without the need for incentives. There is some talk of the government wanting to impose Customs Duty on solar panels and cells; this will dampen the solar sector which is already facing an onslaught from various state regulators as solar power is competing effectively with the grid. We hope the government does not resort to importing fresh duties on the sector.” Those sound like wise words indeed, as a hands off government has usually meant a healthy industry in most cases!