BNEF surveyed the bankability of several inverter brands in which Solis inverters were highly recognized by global technical experts and respondents, and ranked third among the Asian brands. This means that banks are more willing to offer non-recourse loans to photovoltaic power generation projects using Solis inverters.

The survey highlights the creditworthiness and reliability of partnering with Solis considering comprehensive dimensions of evaluation, in particular, long-term warranties and insurance, local support and superior product quality.

BloombergNEF’s survey asked banks, developers and technical due diligence firms which brands, out of 48 module manufacturers and 17 inverter manufacturers, they considered bankable. With a team of experts spread across six continents, the research agency leverages the world’s most sophisticated data sets to create clear perspectives and in-depth forecasts that frame the financial, economic and policy implications of industry-transforming trends and technologies.

The complexity of inverters makes local support important bankability criteria Unlike for modules, inverter warranties are around 5-10 years and inverters will need replacement of parts and maintenance throughout their lifetime, the company issued in its statement.

In March, Saur Energy had reported that Ginlong (Solis) has been listed on the Shenzen Stock Exchange. The company became the world’s only stock listed company with the main business in the string inverter area. It publicly offered 20 million shares, including 20 million IPO shares offered at 26.64 yuan (Rs 273.28) per share and raising funds of 533 million yuan. The post-public-offering share capital of the manufacturer was 79.9 million in total. 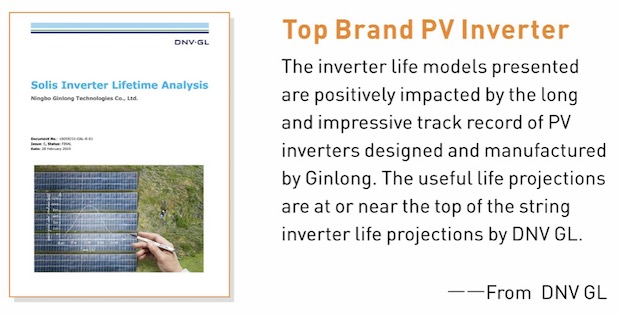