Sungrow has been rated “100% bankability” by BNEF, demonstrating that projects with its inverters are more likely to obtain non-recourse debt financing from banks 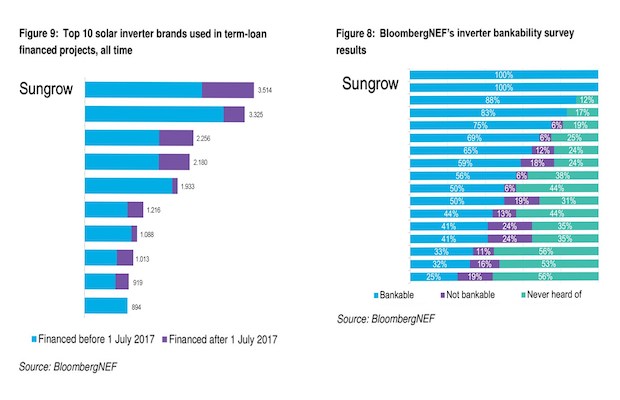 Sungrow, one of the leading global inverter solution supplier for renewables, has announced that it was rated “100% bankability” by BloombergNEF among inverter firms in its latest survey, demonstrating that projects using Sungrow inverters are more likely to obtain non-recourse debt financing from banks compared to other competitors.

The BloombergNEF bankability survey asked banks, developers and technical due diligence firms, which brands out of 17 inverter manufacturers they considered bankable. Sungrow is one of the few inverter companies to be ranked as 100% bankable.

The survey highlights the creditworthiness and reliability of partnering with Sungrow considering comprehensive dimensions of evaluation, in particular, long-term warranties and insurance, local support and superior product quality.

“We are proud of being the preferred brand for customers, partners and financial organizations,” said Cao Renxian, chairman of Sungrow. “Sungrow is providing state-of-the-art products with continued efforts on R&D. And we are establishing ourselves as the comprehensive service platform with a footprint across six continents.”

Recently, the company had released its financial results for the first half of the financial year, reporting that it had witnessed a 14.56 percent year on year growth in revenue, indicating the Company’s robust drive to a sustainable economy.

“The Company’s expansion internationally is particularly significant, now holding leading market positions in the Americas, Southeast Asia and elsewhere,” it issued in a statement.

It is believed that the company’s industry-leading testing center certified by all major international certification bodies including TÜV Rheinland, TÜV SÜD, CSA, UL and CNAS. And its inverters having passed over one thousand independent quality and reliability tests, are a few key reasons for the brand being rated so high in the survey.

Recently, we reported that the company had supplied its 1500Vdc central inverter solutions for Argentina’s largest solar plant. The 100.1 MWp solar plant came online in Cafayate of Salta Province in Argentina.