With the advancement of carbon reduction goals and the intensification of the global climate and energy issues, the installed capacity of clean energy is increasing sharply. As one of the main forces in the field of clean energy, solar power generation has performed well in the past two years. Capacity has soared and construction volume on site has increased significantly, resulting in a large increase in the proportion of DC polarity reversed faults. This episode of Solis Seminar will share with you the challenges related to reverse polarity of DC power and how to prevent it. 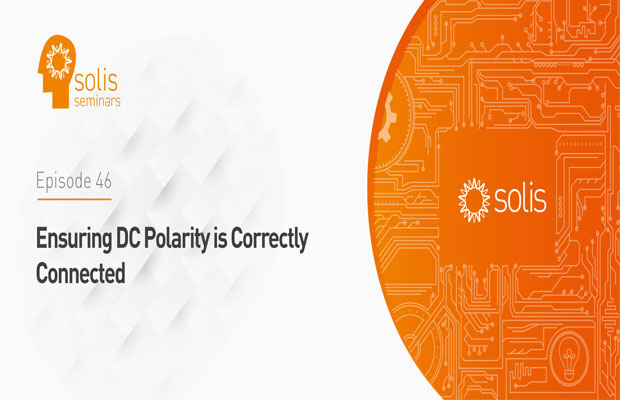 If the PV string polarity is reversed, it may cause equipment damage, energy generation reduction or even fire, so special attention should be paid.  Lets look at some examples.

As shown in the figure above, for two strings in the same MPPT, one string has the correct polarity, and the other is reversed. This will cause the two strings to be short-circuited directly. In this scenario , the inverter will show that the input voltage of the MPPT is 0V and this condition will not damage the inverter, but the short circuit will damage the PV modules.

In the same channel MPPT, the polarities of the two PV strings are reversed

As shown in the figure above, the polarities of the 2PV strings in the same MPPT are reversed. After the DC switch of the inverter is closed, each string forms a short circuit with the IGBT anti-parallel diode of the booster circuit through the DC switch and is turned off. T>he DC switch will be damaged by arcing, and the MPPT of this circuit will not work correctly.

How to prevent DC polarity reversal

① The connectors on both sides of the same cable must be different;

With the rapid increase in installed photovoltaic capacity and the increase in the amount of on-site construction, it is essential to maintain the quality of construction to avoid problems in the later stages of the photovoltaic system. Reverse polarity of the string is one of the most likely problems in the construction process, and it have serious consequences, such as damage to the inverter and other components. Therefore, special attention should be paid to this during installation.