In India’s energy sector which is largely dominated by coal-powered plants, we take a look at the top 5 power producers which are producing power from what India expects will take over from coal in the long term as its leading source of energy – Solar Energy. 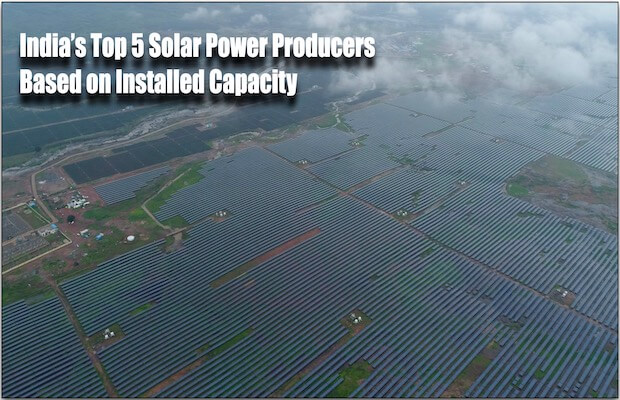 Solar energy has become the leading resource for renewable energy expansion worldwide, and the hallmark example for that is India. In the subcontinent, banking on its aggressive growth over the last few years, solar now ranks ahead of wind energy, as the leading contributor to India’s renewable energy generational capacity.

As of February 29, 2020, a cumulative renewable energy capacity of 132.15 GW had been installed in the country. Of this, grid-connected solar power (installed) capacity accounts for 35.07 GW, with roughly 50 GW capacity in different stages of development or currently under tender.

And there’s more to come, with the central government now trying to catch up to its ambitious target of installing 100 GW (60 GW through utility-scale and 40 GW by rooftop solar) of solar power projects in the country by 2022. A tall task, with a short timeline, but the people in power remain overly optimistic that the targets will be achieved and have since gone on to increase future targets.

Back to the narrative, here we take a look at the top 5 solar power producers in the country based on their installed project capacities.

The undisputed leader in solar power production in the country is ACME Solar Holdings with its installed base of over 2.9 gigawatts (GW). The firm has held on firmly to its leading position for a while now as it also finished top for the financial years 2018 and 2019. Beyond its generational capacity the company, through its sprawling fleet of subsidiaries and Special Purpose Vehicles (SPVs), claims to have a solar pipeline of 2.6 GW of projects currently under construction.

The firm recently made the news in May, when it decided to cancel the project capacity it was awarded by SECI in December 2018 for developing a 600 MW solar project in Rajasthan at a (then) record-breaking tariff of Rs 2.44/kWh. The company tried to repeat its own trend of delivering utility-scale solar projects at the lowest tariff which it had started by winning a tender at Bhadla at the same Rs 2.44/ kWh. However, this time around, the firm has cited the Coronavirus pandemic in a petition filed with the Central Electricity Regulatory Commission (CERC) to drop the project. And is now seeking its bank guarantees from SECI and PGCIL.

Wind energy heavyweight ReNew Power has stormed into the list of top five solar power producers in the country over the last couple of years. The company now has an installed solar generational capacity of 2351.2 MW, which puts it behind ACME on the list. The firm claims to have a total (operational and under development) solar portfolio of 2.9 GW. The firm leapfrogged its way to the number 2 spot on the list, passing Azure, Greenko, Adani on the list, and Tata Power as well which it replaced in the top 5.

In May, the Solar Energy Corporation of India discovered a tariff of Rs 2.90/kWh in its tender for Round-The-Clock’ (RTC) supply of 400 MW renewable energy (RE) power to NDMC, New Delhi, and Dadra & Nagar Haveli. ReNew Power won the complete 400 MW capacity in the tender at a quoted a first-year tariff rate of Rs 2.90/kWh, in what has been touted as the “Biggest Event of 2020 for Renewables” in terms of impact. On the successful e-RA conducted by SECI, Power Minister, RK Singh quoted the win as the “golden chapter added in Indian RE story.” Fresh from its exploits in the tendering market, the firm has committed Rs 2000 crore to set up a solar cell manufacturing unit in the country with an initial annual capacity of 2 GW.

The Adani Group through its independent renewable energy company – Adani Green Energy (AGE) – is the third-largest solar power producer in the country. AGE claims to have 2198 megawatts or approximately 2.2 GW of installed and operational solar capacity in its portfolio. Beyond which, the firms’ pipeline for projects in different stages of development is a whopping 8.42 GW, which is by a huge margin clear of the pipelines of all the other 4 producers in the list. Of the total 2198 MW under operation, 2148 MW capacity is operated by the firm under its 50:50 joint venture with Total. For which, the French multinational energy company had invested about Rs 3,707 crore in the Indian IPP.

Earlier in June, the firm was confirmed as the biggest winner in the recently concluded SECI tender for India’s first and largest (to date) solar tender. The win will see the developer begin work on a massive portfolio consisting of 8 GW of solar power projects in the country along with a 2 GW per annum domestic manufacturing facility for solar modules. The project is estimated to ring in investments worth almost Rs 50,000 crores.

Hyderabad-based Greenko Group, with its operational solar portfolio of 2175 MW, is the fourth-largest solar power producer in the country. The primarily Southern-India focused firm has commissioned (to date) 27 solar power projects in the country, a majority of which are located in Andhra Pradesh and Karnataka. However, the firm has also rapidly expanded operations in Western India where it now handles multiple projects.

Greenko made the news when it emerged as the winning bidder (along with ReNew Power) in SECI’s tender for the development of 1.2 GW wind-solar hybrid power projects with associated energy storage capacity and guaranteed peak power supply. The firm had been awarded 900 MW capacity in the tender after submitting a bid at a peak power tariff rate of Rs 6.12/ kWh. Following this, AFRY India had won Letter of Award (LoA) from Greenko for providing detailed design engineering services for the companies 1.2 GW pumped storage project. AFRY received the contract for providing consultancy services for the Pinnapuram IREPS project which will be developed in Andhra Pradesh.

Azure recently made the news when it decided to exercise its greenshoe option for developing an additional 2 GW interstate transmission (ISTS) solar projects in addition to an earlier 2 GW win in SECI’s tender for setting up of solar power projects with domestic manufacturing plants for solar modules. (The other winner was Adani, as detailed above). Under this greenshoe LOA, Azure will supply power for 25 years at a tariff of Rs 2.92 per kWh. The project also comes with an additional 500 MW (total 1.5 GW) cell and module manufacturing capacity requirement. The combined capacity for the project for Azure is now worth 4 GW with full commissioning expected by 2025.

Read the first article in this series “India’s Top 5 Power Producers and their Renewable Energy Plans” by clicking here.