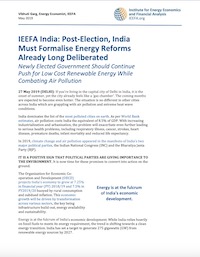 Although renewable energy installation has seen tremendous progress due to policy initiatives, further energy reforms are necessary for the newly re-elected Government of India to meet its ambitious target to generate 275 gigawatts (GW) from renewable energy sources by 2027.

This new paper by IEEFA, “Post-election, India must formalise energy reforms already long deliberated” provides an early roadmap for the Government to accelerate reform in the energy sector. According to the Author of the report, Vibhuti Garg, the promises made pre-election must now turn into action to combat air pollution, address climate risk, and accelerate much needed massive renewable capacity addition.