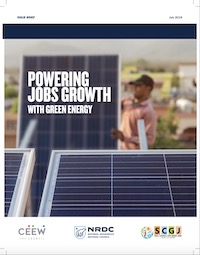 The findings were released in a new report ‘Powering Jobs Growth with Green Energy’ by the Council on Energy, Environment and Water (CEEW), in collaboration with the Natural Resources Defence Council (NRDC), and the Skill Council for Green Jobs (SCGJ).