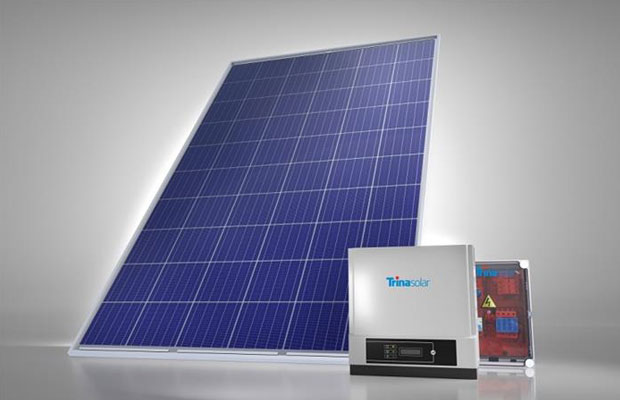 Trina Solar, the leading solar energy solutions provider in India, is moving into the household and small-to-medium enterprise (SME) sector with today’s launch of Trinahome.

The news comes on the eve of next week’s Renewable Energy India Expo being held in Noida on 18-20 September. Trina Solar is a key exhibitor at this year’s show.

“Trina Solar is already number one in India’s solar energy market thanks to the large-scale utility projects, namely solar farms, we have already completed. We have provided solar cells and modules to many developers in India,” says Yin Rong Fang, Trina Solar president of global sales and president of overseas commercial and residential solutions.

According to India’s Ministry of New and Renewable Energy, there was 23.1GW of installed solar energy capacity in India as of 31 July this year.

Yin says: “Trina Solar supplied 3.5GW, so we accounted for 15% of the total. That means we are the clear market leader here in India.”

India is also Trina Solar’s second largest market in Asia Pacific after China. “Trina Solar was founded in China in 1997 and has been in India since 2010,” says Yin.

“Now that we have solidified our strong position in the utility segment of the market, we are moving into the household and SME sector with the launch today in India of Trinahome.”

Trina Solar India director, Gaurav Mathur, says, “We recognize that B2B (business-to-business) is very different to B2C (business-to-consumer). Prior to today’s launch, we have been working behind the scenes to develop a nationwide customer service network, so we can reach consumers in all the towns and cities in India. This includes even those in the most remote rural areas.”

“We have achieved this by signing up local partners throughout the country, namely distributors and installers,” says Mathur.

“Trina Solar has also been training and certifying installers, so they can provide a high quality of service and meet Trina Solar’s high-quality standards.”

Mathur says, “The reason we decided to move into the household sector, is because we can see there is enormous market opportunity to bring solar energy to Indian consumers.”

“India’s government has set a goal of 100GW of solar energy capacity by 2022 of which 60GW is to come from solar energy utility projects and 40GW from rooftop solar energy.”

“India has made good progress in working towards achieving the government’s target of 60GW of solar energy utility capacity by 2022. But the country is lagging behind when it comes to achieving the 40GW target for rooftop,” he says.

According to India’s Ministry of New and Renewable Energy, India’s solar energy capacity, as of the end of July this year, was 21.9GW from utility and only 1.2GW from rooftop.

Mathur says, “Trinahome will help to boost demand in the market for rooftop by giving SMEs and households an easy and affordable solution.”

“Trinahome is the very first ‘all in one’ solution in India, which means all the components – the solar modules, inverter, grid box, mounting system, etc – all come from Trina Solar and are backed by Trina Solar warranties,” he says.

Mathur says, “This makes it very easy for the consumer, because they know that the whole system is backed by one manufacturer. It also means the components work together seamlessly to provide greater energy efficiency.”

“The key benefit of solar energy is you will be more self-sufficient and can reduce your energy bills. Solar energy is also a renewable resource, so it is better for the environment than relying on electricity generated from fossil fuels, such as coal,” he adds.

He also says, “One of the key factors driving people to adopt solar energy is because the cost of electricity, from fossil fuels, keeps increasing.”

“Electricity prices can have a big impact on total household and business expenses.”

Trinahome is also an ideal solution for smaller commercial and industrial companies that want to reduce their energy bills.

Mathur says that Trinahome comes in three sizes: 3KW, 5KW and 10KW. “Trina Solar also has different mounting systems for different roof-types, so Trinahome can be installed on any type of roof in India,” he adds.