Interestingly, the fourth quarter of 2020 was historic for the company as it developed its business combination with Kensington Capital Acquisition on November 25, 2020, and became a publicly listed company on the New York Stock Exchange (NYSE). According to the firm, their liquidity position rose by USD 730 million in gross proceeds from the business combination (USD 230M from KCAC’s trust account and USD 500M from KCAC’s PIPE offering).

Kensington Capital Acquisition Corporation is a special purpose acquisition company formed to effect a merger, stock purchase, or similar business combination with a business in the automotive and automotive-related sector.

Additionally, QuantumScape also received USD 388 million in gross commitments earlier in the year from a Series F offering (USD 288 million closed in November and December 2020, and an incremental 100M investment is anticipated from Volkswagen upon achieving a technical milestone in Q1 of FY21). Resulting, these transactions have increased the firm’s liquidity position to over USD 1 billion. 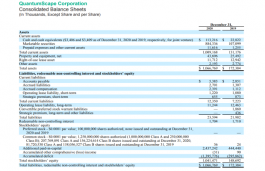 “I am delighted to issue QuantumScape’s first quarterly letter as a publicly traded company.”

So far, the company is expecting its current cash and aforementioned Q1 of FY21 milestone-based investment to fully fund the long-term business through the first commercial production targeted for 2024.

The company has been developing new solid-state battery technology, unlike a conventional battery that uses a hosted anode (instead of a lithium-metal anode), the key performance metrics for these batteries will be similar to conventional lithium-ion batteries and miss the benefits of the solid-state approach (significantly higher energy density, fast charge, life, and cost).

“We are pleased to report for the first time that we have made 4-layer multilayer cells in the 30x30mm form factor, and we have now seen close to 800 cycles at 30°C with over 90% capacity retention at both C/3 and 1C rates – substantially similar to the single-layer cells we reported in December,” the company said.

To increase the capacity, QuantumScape is ordering new automation and production tools, including an automated stacker and continuous flow heat treatment tools, which needed to install and bring up during the year. “To help with further scale-up and based on this recent progress we are pleased to announce we have decided to build a pre-pilot line facility in San Jose, which we call QS-0,” the company affirmed.

Additionally, explaining their future plans, the company stated, “In 2021, we plan to spend between USD 230 million and USD 290 million in combined opex and capex to support our multilayer cell development, to continue to develop our production processes, and to build out QS-0. This would allow us to enter 2022 with a liquidity position of over USD 900 million.”