A team from the Department of Electrical & Electronics Engineering at the NMAMIT has transformed an ICE vehicle into an energy efficient Electric Vehicle. 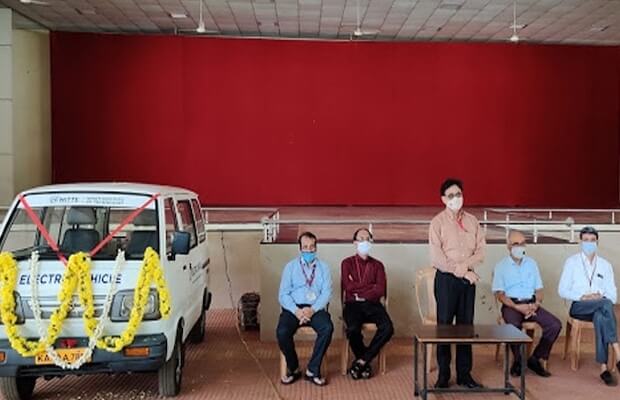 A team of students and teachers of the Department of Electrical & Electronics Engineering at the NMAM Institute of Technology (NMAMIT) in Karnataka have transformed a petrol-based internal combustion engine (ICE) vehicle into a pollution-free, energy efficient & eco-friendly Electric Vehicle.

The power electronic converters designed and developed by the team successfully drive the electric motor and charge the battery array of the vehicle.

NMAMIT principal Niranjan N Chiplunkar launched the electric car at the campus recently and appreciated the efforts of the team.

Project Mentor, Dr. Suryanarayana K, Professor, Department of Electrical & Electronics Engineering explained that a microcontroller unit designed and developed in the research and innovation centre of the institute controls the electric vehicle with Semikron power electronic stack, an array of 25 batteries of 12V, 45Ah each, and a three-phase 7.5HP induction motor.

The team has not only developed a microcontroller system with algorithms and required controls, but also has designed a battery charging circuitry. Consistent endeavours of the team for about nine months in converting the engineering theory into practice resulted in the successful execution of the electric vehicle with a peak speed of 50 kph and estimated the distance of 80 kms with the batteries fully charged.

In the other part of the country, the Delhi government last week launched its new electric vehicle policy aimed at curbing pollution in the national capital, amongst the world’s most polluted cities, and also to create jobs and boost the local economy.