New Battery Electrolyte That can Boost Performance of EVs

A team of scientists has invented a new lithium-based electrolyte, that they show can pave the way for the next generation of battery-powered EVs 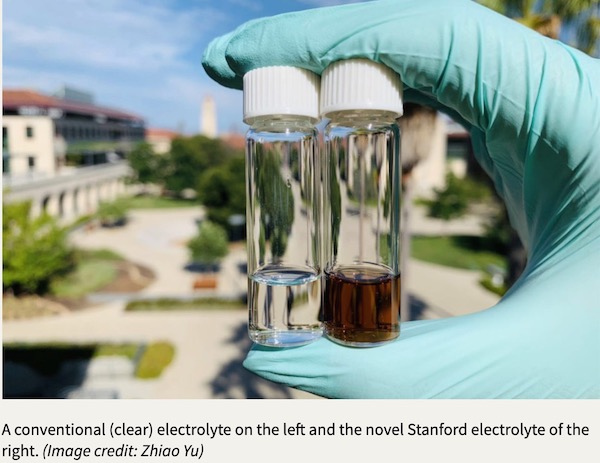 A team of scientists at Stanford University has invented a new lithium-based electrolyte, that they show can pave the way for the next generation of battery-powered electric vehicles (EVs).

In a study published in the journal Nature Energy, the researchers demonstrate how their novel electrolyte design boosts the performance of lithium metal batteries, a promising technology for powering electric vehicles, laptops and other devices.

“Most electric cars run on lithium-ion batteries, which are rapidly approaching their theoretical limit on energy density,” said study co-author Yi Cui, professor of materials science and engineering and of photon science at the SLAC National Accelerator Laboratory. “Our study focused on lithium metal batteries, which are lighter than lithium-ion batteries and can potentially deliver more energy per unit weight and volume.”

Lithium-ion batteries, used in everything from smartphones to electric cars, have two electrodes – a positively charged cathode containing lithium and a negatively charged anode usually made of graphite. An electrolyte solution allows lithium ions to shuttle back and forth between the anode and the cathode when the battery is used and when it recharges. 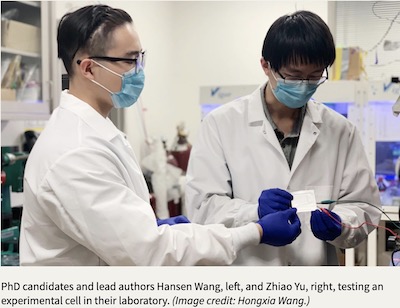 “Lithium metal batteries are very promising for electric vehicles, where weight and volume are a big concern,” said study co-author Zhenan Bao, the K.K. Lee Professor in the School of Engineering. “But during operation, the lithium metal anode reacts with the liquid electrolyte. This causes the growth of lithium microstructures called dendrites on the surface of the anode, which can cause the battery to catch fire and fail.”

Researchers have spent decades trying to address the dendrite problem.

“The electrolyte has been the Achilles’ heel of lithium metal batteries,” said co-lead author Zhiao Yu, a graduate student in chemistry. “In our study, we use organic chemistry to rationally design and create new, stable electrolytes for these batteries.”

For the study, the team explored whether they could address the stability issues with a common, commercially available liquid electrolyte.

“We hypothesized that adding fluorine atoms onto the electrolyte molecule would make the liquid more stable,” Yu said. “Fluorine is a widely used element in electrolytes for lithium batteries. We used its ability to attract electrons to create a new molecule that allows the lithium metal anode to function well in the electrolyte.”

The result was a novel synthetic compound, abbreviated FDMB, that can be readily produced in bulk.

“Electrolyte designs are getting very exotic,” Bao said. “Some have shown good promise but are very expensive to produce. The FDMB molecule that Zhiao came up with is easy to make in large quantity and quite cheap.”

The Stanford team tested the new electrolyte in a lithium metal battery. The results were dramatic. The experimental battery retained 90 percent of its initial charge after 420 cycles of charging and discharging. In laboratories, typical lithium metal batteries stop working after about 30 cycles. The researchers also measured how efficiently lithium ions are transferred between the anode and the cathode during charging and discharging, a property known as “coulombic efficiency.”

“If you charge 1,000 lithium ions, how many do you get back after you discharge?” Cui said. “Ideally you want 1,000 out of 1,000 for a coulombic efficiency of 100 percent. To be commercially viable, a battery cell needs a coulombic efficiency of at least 99.9 percent. In our study we got 99.52 percent in the half cells and 99.98 percent in the full cells; an incredible performance.”

In addition to longer cycle life and better stability, the FDMB electrolyte is also far less flammable than conventional electrolytes, as the researchers demonstrated in this embedded video.

“Our study basically provides a design principle that people can apply to come up with better electrolytes,” Bao added. “We just showed one example, but there are many other possibilities.”