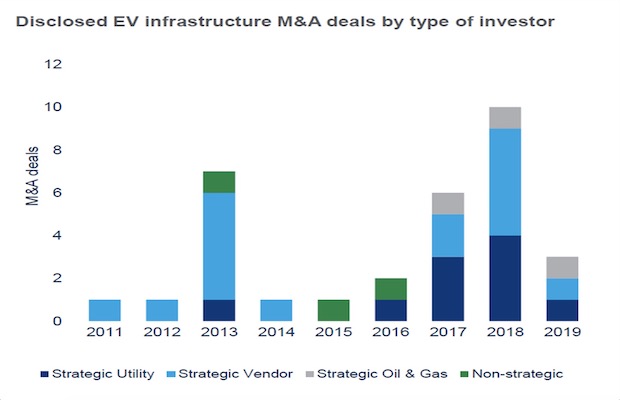 A new report has revealed that strategic vendors – companies that offer products or services in the EV market – and European utilities were responsible for over 80 percent of electric vehicle (EV) charging Mergers & Acquisitions (M&A) activity from 2010 through H1 2019.

The Wood Mackenzie report, ‘Corporate Activity in the EV Infrastructure Space’, reveals that strategic vendors were responsible for 50 percent of acquisitions during the period studied. European utilities were the second most active group in EV infrastructure M&A, completing ten acquisitions.

Kelly McCoy, Wood Mackenzie research associate, said that since 2011, there have been 32 acquisitions of EV infrastructure companies. 26 of those were completed by strategic vendors and European utilities. These companies are using acquisitions to enter and strengthen their position in the EV charging market. They often involve other elements of flexibility, such as energy storage or demand response – both of which are becoming increasingly important to utilities in particular.

“Acquisitions of network operators, EV charger manufacturers and vertically integrated vendors accounted for over half of the deals for both vendors and utilities.

“Since 2010, 61 EV charging infrastructure vendors have raised a cumulative total of $1.7 billion across 133 investment rounds. A total of 29% of these rounds did not disclose the investment value, indicating the value of investments is even higher,” she added.

The report further added that across all EV infrastructure submarkets, non-strategic investors – those that may invest in both energy and non-energy companies – accounted for one-third of all M&A deals. Strategic oil and gas activity did not lead any of the rounds until 2017, the same year of the first acquisition made by an oil and gas player.

“BP and Shell have been the most active oil and gas firms. They have acquired three network operators and vertically integrated vendors between them, falling in line with their strategy to develop a presence in power and transport electrification,” McCoy added.

Further, it was reported that M&A activity in the EV infrastructure market has aligned with regional trends and differences. “Utilities in Europe are very active in acquiring charger companies to gain additional market share and position themselves to benefit from continued policy support for the electrification of transport. Regulated US utilities typically cannot own or operate their own charger networks and therefore seek to engage in partnerships to expand access to chargers in their service territory,” she added.

“As the market continues to grow and expand, more public chargers will be needed to both reduce range anxiety fears and improve access. New chargers must be deployed to support emerging vehicle classes and partnerships will be needed to balance grid needs and customer charging demand,” concluded McCoy.