EMT and i-DE, Iberdrola’s electrical distribution company, have agreed to work together on the electrification of the urban bus network in Madrid. 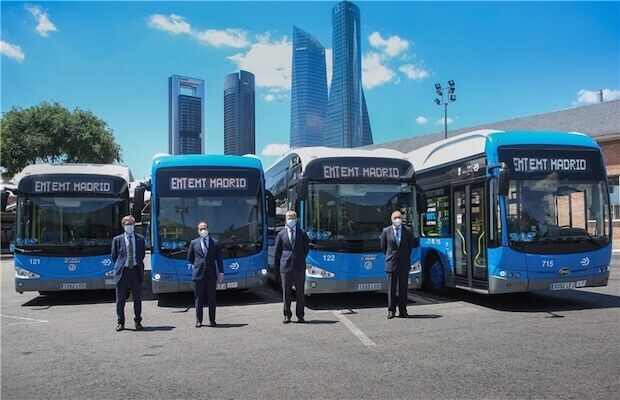 The Madrid Municipal Transport Company (EMT) and i-DE, Iberdrola’s electrical distribution company, have agreed to work together on the electrification of the urban bus network in the city of Madrid, with the aim of consolidating sustainable mobility as an alternative to traditional transport. The initiative was finalised with the signing of a collaboration agreement to develop and implement the optimal Smart City model for Madrid.

i-DE will advise on and facilitate the electrification of EMT’s urban bus network and will collaborate in studying the options for the electricity supply to EMT facilities from which the urban buses operate, as well as in planning the charging infrastructure network for present and future electric transport. In fact, both companies have already identified optimal locations in the first EMT garages to be electrified, such as those in Fuencarral and Carabanchel.

i-DE claims that the smart electricity grids are configured as part of the new energy model’s distribution system and the smart platform necessary for the transition towards a decarbonised economy. They thus make it possible to incorporate a ‘neural trace’ into the grid to promote a smart city model with more efficient and sustainable services.

The EMT is becoming one of the main European actors in the promotion, development and implementation of measures to improve air quality and combat climate change in the city of Madrid. The company is a benchmark in the development of less polluting, more efficient alternative fuels and energies with much less acoustic impact for transportation and it considers the electric vehicle to be a strategic element in this.

The project the company is now undertaking with Madrid City Council focuses on the five strategic areas for a smart city, from the point of view of the electricity grid, namely electrification of the most polluting sectors, electric mobility, network infrastructure, energy efficiency and public awareness with the following objectives:

CESC To Serve Chandigarh Power Needs, As It Wins Distribu...

Li-Ion to Stay The Dominant Storage Standard For India U...