Electrify America has opened more than 500 EV charging stations across the US, surpassing a significant milestone in the company’s expansion.

Electrify America has announced that it has opened more than 500 electric vehicle (EV) charging stations across the US, surpassing a significant milestone in the company’s expansion. With more than 2,200 individual DC fast chargers nationwide, the firm claims it is delivering on its commitment to making EV ownership more convenient than ever.

Since opening its first site in May 2018, the firm has set a rapid pace for its network expansion, opening an average of nearly four stations per week. Even with the breakneck pace, the network is diligent in ensuring each aspect of the charging experience is designed with the customer in mind.

Stations are conveniently located along major routes and in metro areas, strategically placed near shopping, banking and dining amenities. Each station has between three and ten individual DC fast chargers to accommodate multiple vehicles charging at one time. The chargers utilise the fastest technology available today – providing speeds of up to 150 kW and 350 kW – to help reduce the amount of time spent charging.

“Electrify America is raising the bar when it comes to the high-speed charging experience needed to expedite the transition to an electric future,” said Giovanni Palazzo, president and chief executive officer, Electrify America. “In just over two years, we’ve made great progress in expanding our network while maintaining a deliberate focus on delivering the fastest charging speeds possible – 150kW and 350kW. We are confident that reduced charging times and increased charger availability will help Electrify America, and the industry as a whole, deliver the future-proof charging experience that customers deserve.”

Beyond the installation of charging stations, Electrify America is focused on innovating the overall EV charging experience. The network recently introduced a new program to add solar-powered canopies at select station locations, providing customers with shade and protection from the elements while potentially reducing their electricity draw from the local utility. 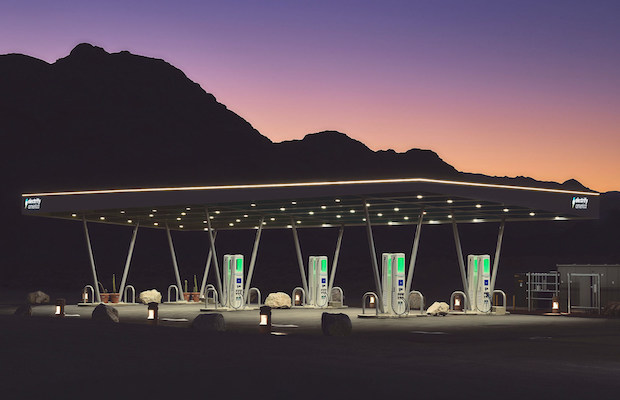 The first DC fast charger site to feature a solar-powered canopy is in Baker, California, where the solar panels charge a battery energy storage system (BESS) on site. The battery energy storage systems store power when electricity costs are low and supplement power during high points of consumption, minimizing the impact on the electrical grid. The company expects to have more than 125 fully operational BESS installations in 2021, with 75 located at California stations.

The firm plans to continue innovating and expanding its network, which is the largest open DC fast-charging network in the U.S. The company completed its first cross-country routes earlier this year, spanning 11 states and over 2,700 miles to take drivers from Los Angeles to Washington, D.C. By the end of 2021, Electrify America plans to install or have under development approximately 800 total charging stations with about 3,500 DC fast chargers.