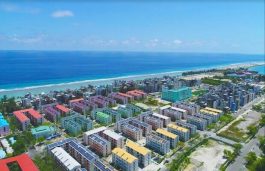 Maldives has announced its largest renewables project so far, inviting bidders to submit applications to install 21 MW solar systems on its 6 major islands. The Island nation of Maldives has announced its largest renewable energy project so far, calling interested parties to submit applications for the pre-qualification to install 21 MW grid-tied solar PV […]

Oberoi Group Signs MoU with EESL to Further its Sustainab...

CESL Tenders for Installation of Solar Systems at Various...