A team at the Delft University of Technology in the Netherlands, The TU Delft Solar Boat Team is committed to a green future by building sustainably powered boats. This year, the 2021 team is moving into uncharted waters with the Hydro Motion project.

The TU Delft Solar Boat team consists of 21 students from eight different fields of study. In one year they go through the process of designing, producing, and finally racing a boat that sails on green energy. The solar boat team is fully committed every year to show the applications of their advanced technologies at spectacular races.

The team is building its first boat that runs on hydrogen. To show the potential and power of hydrogen, this flying hydrogen boat will race at the World Championships on the open sea in Monaco. Before making the switch to hydrogen, the solar boat team had a rich history, as they have built boats powered by solar energy i.e. solar boats, hence the team’s name.

The team will compete in the World Championship next week from 8 to 10 July 2021. The students will be going for the win of the challenging long-distance race, competing against other sustainably powered boats. The Hydro Motion boat is an impressive inspiration for the maritime sector.

21 students have made it possible, a seaworthy hydrogen boat, fully equipped with a hydrogen system and super 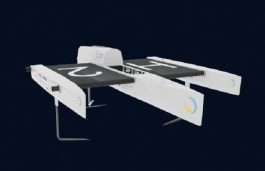 strong hydrofoils under the boat. At a speed of 22 kilometers per hour, the hydrofoils make the boat, a trimaran weighing over 1000 kilograms, fly above the water. The hydrogen system is combined with wings that make it the world’s first flying hydrogen boat.

“For, 15 years, we have inspired the maritime industry with our flying solar boats. This year, the 2021 team took the big step with the Hydro Motion project. We are developing our first flying boat that sails on hydrogen! We are moving from generating green energy to storing green energy starting this year,” says the Solar boat Team.

Using hydrogen as an energy source has the benefit that it doesn’t produce carbon oxide and is a clean fuel. On top of that, it has an energy density that is 235 times higher than lithium-ion batteries and is very lightweight compared to batteries. This means that energy can be stored more densely, which is a huge advantage.