Will Solar Powered Refrigeration Come Of Age In Vaccination Push?

The Covid pandemic, and now finally, the vaccination push across the world against the disease has put the spotlight firmly on the role distributed solar products, particularly Solar refrigeration could play. In the African continent, with almost 600 million people off the grid and  many more without access to the kind of exacting cooling requirements some of the vaccines have, solar powered refrigeration might yet be a life saver. In countries like India and South Asia in general, a large opportunity has already been highlighted by GOGLA, which believes that the vaccine simply fast forwards the need to consider solar refrigeration in a big way. (Check end of story for link to report)

Africa, with a cumulative Covid-19 case count of around 2,489,430 and 59,573 cumulative deaths till now was always under the spotlight. Thankfully, the continent has not been as badly as the US or Europe, for the same unexplained reasons that South Asia has escaped the worst of the pandemic. Moreover, the African Union has secured 270 million vaccine doses for distribution across the continent in addition to those promised by the global vaccine program COVAX, a number that may still not be enough. For what they have, like much of the developing world, countries across Africa and Asia will need to depend on the Covishield option from Astra Zeneca, manufactured in India and with far less exacting storage conditions as compared to the Pfizer and moderna vaccine’s controlled sub zero requirements.

To answer this, solar powered refrigeration comes in the role, and help in the process. As, there is a “cold chain” a network of vehicles, fridges, and cold rooms, that can be used to transport the vaccine seamlessly from the manufacturer to the immunization point.

Solar refrigeration has been around for a long time, though it is now that the major improvements made to these machines will be highlighted. In the 1980s, solar refrigerators were introduced in areas without electricity. However, one of the major drawbacks of solar refrigerator technology was the large battery systems that were required to store the sun’s energy for use during the night and cloudy periods. These batteries have a relatively short lifetime of 3 to 5 years, and replacements are expensive and sometimes unavailable for local purchase in low-income countries. For these reasons solar refrigerators have often been abandoned when the battery dies—well short of the useful life of the refrigerator itself. But a new breed of phase change refrigerators are changing he picture now

Speaking of which, a professor at the University of Birmingham, in the UK, who is working with the UN-backed Africa Centre of Excellence for Sustainable Cooling and Cold Chain to improve refrigeration networks in Africa, Toby Peters commented, “We should have been designing the cold chain the day we started designing a vaccine.”

“We knew we were going to have to move billions of vaccines around the world, all the way out to rural communities, and that we’d need a temperature-controlled environment,” Toby further added. 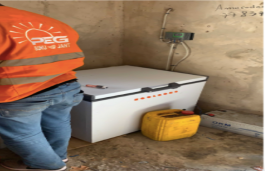 Besides, there is a company that offers pay-as-you-go solar-powered products to people in West Africa, named PEG Africa. Interestingly, the company has started providing solar-power systems to off-grid health clinics, with funding from Power Africa, a network of private and public groups set up by USAid.

PEG provides financing for life-changing and useful products such as solar home systems, a cold chain for food products but, now it is testing pay-as-you-go solar freezers among fisherwomen in Ghana, Ivory Coast, and Senegal.

In addition to this, there is another company named Gricd, a small Nigerian startup, that is producing solar-powered cold boxes for vaccine shipment that can be kept at minus 20 degrees Celsius and can be controlled remotely and monitored in real-time.

Interestingly, these solar cold boxes ranging from 15 to 100 liters in size, and the smallest can transport 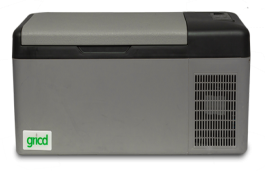 around 200 doses of vaccine. The 15-liter box is designed specifically for the “last mile” delivery. It could fit into any existing transport medium, be it a boat, the back of a motorcycle, a bicycle, or a person’s back. The solar-powered batteries can maintain a stable internal temperature for up to a week, which makes them suitable for off-grid areas especially. Additionally, it also contains a device that monitors location, humidity, and temperature, and transmits this data to the distributor in real-time.

However, Gricd cold boxes have not yet received PQS certification from the WHO but, they are certified by the Standards Organisation of Nigeria.

Gogla, the global distributed solar body estimates a market opportunity of $20 billion for solar refrigeration, most of which can be actualised now, while the  need for a vaccine cooling solution will create enough demand. For India specifically, they have a report with specific recommendations too.