Installation at Tesla is expected to be world’s largest rooftop solar system with a generation capacity of 70 MW which would outpace any other solar energy system. 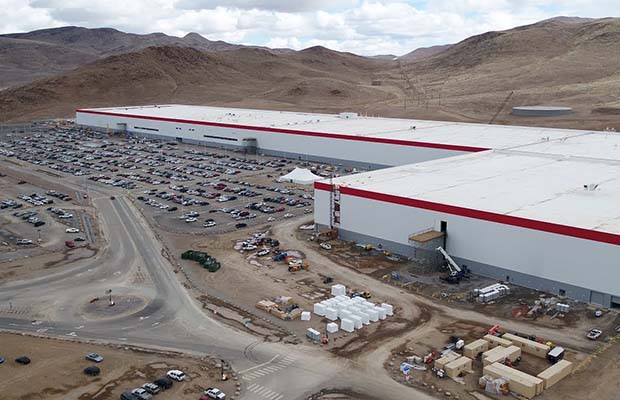 Electric Car Company, Tesla is heard to have started expanding its rooftop solar array system for its Nevada based Gigafactory 1 in a bid to power the entire factory from solar energy.

The solar array after expansion by Tesla is expected to be world’s largest rooftop solar system with a generation capacity of 70 MW which would outpace any other solar energy system by great margins.

Announcing the solar expansion in January 2017, Tesla said, “GF1 is an all-electric factory with no fossil fuels (natural gas or petroleum) directly consumed. We will be using 100% sustainable energy through a combination of a 70 MW solar rooftop array and solar ground installations. The solar rooftop array is 7 times larger than the largest rooftop solar system installed today.”

Further, Tesla had stopped the solar array work after installing 6 clusters of solar panels which it had recently resumed as seen in satellite images released by planet.com.

Presently, Tesla’s gigafactory has covered an overall area of 4.9 million sq. feet which it claims is only 30 percent of the total area yet to be brought under use. This gives the company a larger space to realize the development of world’s largest rooftop solar array.

Significantly, Nevada gigafactory is also the world’s largest battery factory with an output of 20 GWh per year capacity and employing around 3,000 workers.

Besides powering its own operations with solar energy, Tesla is already a budding player in the rooftop solar installations in Buffalo.