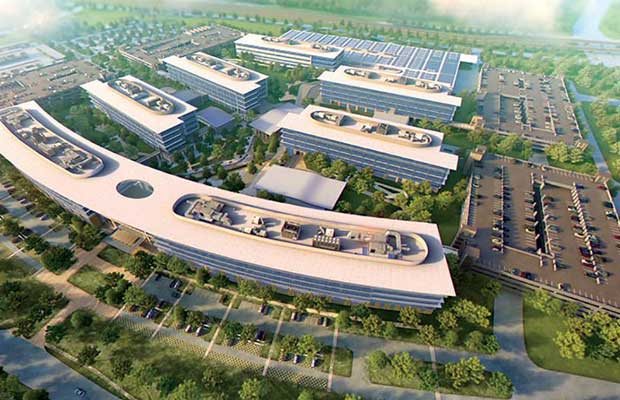 The SunPower solar system is expected to generate enough clean energy to offset approximately 33 percent of the headquarters’ energy needs, reducing Toyota’s reliance on traditional electricity from the grid

SunPower has announced that construction has begun on an 8.79-megawatt SunPower solar system at Toyota Motor North America’s new headquarters in Plano, Texas, which the auto maker plans to occupy this year. Close to one megawatt larger than originally planned, it is expected to be the Lone Star State’s largest corporate office on-site solar installation among non-utility companies.

About 50 certified workers are now installing high-efficiency SunPower solar panels on steel carport structures across the top of four parking garages. When completed, more than 20,000 solar panels will cover the area equal to 10 football fields, offering shade and protection to vehicles underneath. The SunPower solar system is expected to generate enough clean energy to offset approximately 33 percent of the headquarters’ energy needs, reducing Toyota’s reliance on traditional electricity from the grid.

Toyota is integrating a range of energy efficient technologies and sustainable materials into the design of its state-of-the-art campus, with the intention of achieving LEED Platinum certification by the U.S. Green Building Council (USGBC). SunPower’s 20 percent efficient E-Series solar panels selected for this project are Cradle to Cradle Certified Silver, which may provide Toyota a significant advantage toward reaching that goal.

As a result of 14 years of partnership, SunPower solar power systems are currently operating at a number of Toyota facilities in the U.S.:

Toyota is financing the SunPower solar project installed at its Plano, Texas, location through a power purchase agreement (PPA) arranged by SunPower, which allows Toyota to buy power at competitive rates – acting as a hedge against future utility rate increases – with no upfront capital cost. Toyota will own the renewable energy credits associated with the system.