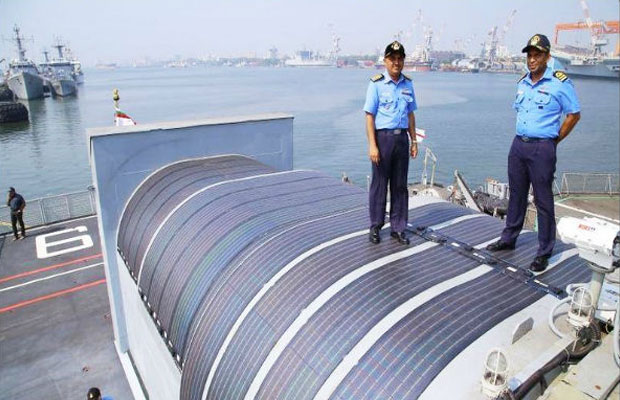 With the installation of 5 KW solar power system, Navy’s Survey Vessel INS Sarvekshak will be able to avoid around 60,225 kg of carbon a year and 22,995 litres of diesel.

For the first time in India, solar panels have been installed on an Indian Navy’s Survey Vessel INS Sarvekshak.

INS Sarvekshak has been fitted with 18 solar panels atop its hangar and took about six months to put the entire system in place. The solar energy generated from the panels will be used for communication equipment, battery charging, general lighting and to power couple of air conditioners.

“Even if the system is used for 25 days in one year, the system can repay its cost in less than 10 years while protecting the nature,” said a navy official speaking to PTI.

With the installation of 5 KW solar power system, Navy’s Survey Vessel INS Sarvekshak will be able to avoid around 60,225 kg of carbon a year and 22,995 litres of diesel.

The Navy official said “In 25 years of life cycle, the total carbon saved will be around 15 lakh kg and 5.75 lakh litres of diesel by this innovation,” He added this was “a unique activity never attempted on any warship in India…perhaps not even abroad on warships.”

Noting that the world is looking for clean, renewable and sustainable sources of energy to protect and reduce the harm caused to the environment, the navy said the deterioration of the environment was highly correlated to the production and usage of fossil-based fuels worldwide.