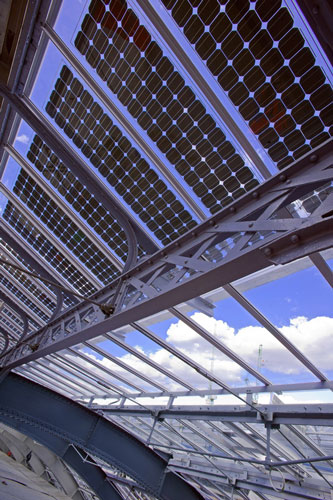 In a bid to harness solar energy, Mumbai Metro One Private Limited (MMOPL) has planned to install solar panels on Versova-Andheri-Ghatkopar metro corridor to meet its electricity requirements. It plans to generate approximately 2.30 MWp by installing these solar panels.

According to the company officials, these solar panels would be installed on rooftops of Andheri and Ghatkopar stations in the first phase and later be put up in the rest of the stations. “The electricity generated from these solar panels will be utilised for non-traction use like lighting, air-conditioning and maintenance. Mumbai Metro One’s auxiliary power requirement for non-traction use is 6.9 mw, 30 per cent of which will be met with solar energy once the system is up and running,” read a statement from MMOPL.

It has already initiated the installation of light-emitting diode (LED) lights at all its metro stations, depot, and administrative buildings to reduce consumption of electricity. “The installation of solar panels and LED lights will save carbon footprint of approximately 2,430 tons per year. Our initiative to harness solar power for meeting a part of our electricity needs is to reinforce our commitment to the green cause,” an MMOPL spokesperson said.