A new report by IRENA has revealed that India now holds the tag of the lowest cost producer of solar power in the world. 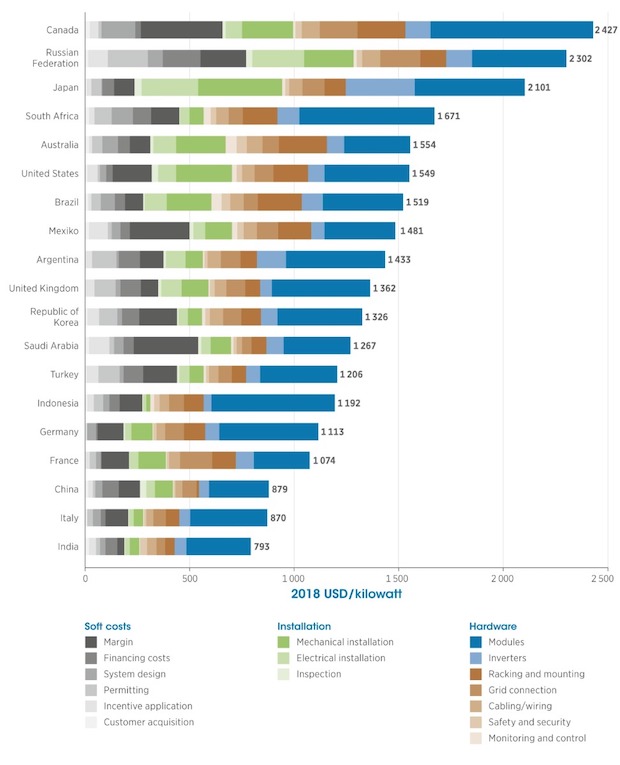 The International Renewable Energy Agency’s (IRENA) latest report, ‘Renewable Power Generation Costs in 2018’ highlights the latest trends for each of the main renewable power technologies. And draws on the latest cost and auction price data from projects around the world, revealing that India is now the lowest cost producer of solar power in the world.

Further, IRENA conducted an analysis of the decline in the cost of setting up solar PV projects between 2010 and 2018 across eight major markets including China, France, Germany, India, Italy, Japan, UK, and the US. The costs were found to have dropped at the fastest pace – 80 percent – in India.

In 2018, 94 Gigawatt of new solar PV capacity was added globally, accounting for 55 percent of the total new renewable power generation capacity additions. The largest markets for new capacity additions in 2018 were China (44 GW), India (9 GW), the United States (8 GW), Japan (6 GW), Australia and Germany (4 GW), and the Republic of Korea, Mexico, and Turkey (around 2 GW each).

The report also revealed that the costs from all commercially available renewable power generation technologies declined in 2018. The global weighted-average cost of electricity declined 26% year-on-year for concentrated solar power (CSP), followed by bioenergy (-14%), solar photovoltaic (PV) and onshore wind (both -13%), hydropower (-12%), geothermal and offshore wind (both -1%).