Arkona started its power supply to the German national grid in September 2018, and its 60 wind turbines, each producing six megawatts, reached peak production in 2019 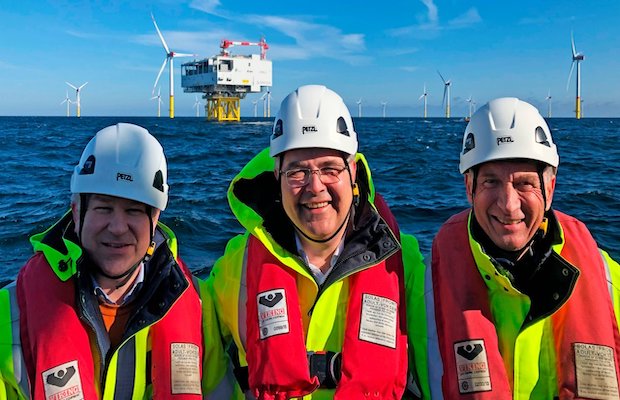 Chancellor of Germany Angela Merkel and Norwegian petroleum and energy minister Kjell-Børge Freiberg opened the Arkona offshore wind farm in the Baltic Sea in Mukran on the German island of Rügen.

The Arkona offshore wind farm which is now the largest operational wind farm in the Baltic Sea was co-developed and will be operated by German utility E.ON and Norwegian energy giant Equinor.

Angela Merkel said, “Arkona sets a standard for the transition of the energy system. We will discuss how we achieve climate goals. It is not sufficient to convert energy production. We see great potential in the heating sector. We are also facing a major change in the transport sector.”

The wind farm is located 35 kilometers northeast of the island of Rügen. And has a capacity of 385 megawatts using 60 turbines of the 6-megawatt class from Siemens, can supply approximately 400,000 households with renewable energy. The investment volume amounts to EUR 1.2 billion. Compared to conventionally generated electricity, Arkona saves up to 1.2 million tons of CO2 annually.

Johannes Teyssen, CEO of E.ON said, “The task now is to expand renewable energies vigorously and at the same time make them cheaper. Green energy must be delivered to people and businesses much more efficiently than before. This is a Herculean task that requires all the strength of large companies. E.ON will focus on better integration and utilisation of renewables for our customers and society.”

Arkona started its power supply to the German national grid in September 2018, and its 60 wind turbines, each producing six megawatts, reached peak production in 2019.

Jon Erik Reinhardsen, Chairman of the Board of Directors at Equinor: “The Arkona opening is a key milestone for Equinor. Equinor is already meeting 25 percent of Germany’s need for natural gas. Arkona is Equinor’s fourth wind farm coming online since 2012 and is a key contribution to developing Equinor into a broad energy company. We would also like to thank E.ON for its excellent work on the development and operations of Arkona.”

In addition to its share in the Arkona offshore wind farm, Equinor holds a position in the Baltyk I, II and III wind farm projects in the Polish sector of the Baltic Sea.

BMW Must Prioritise Full-Electric Vehicles to Meet its 20...

Floating Offshore the Next Frontier in Wind Development i...