In its latest order, CERC has ordered partial relief to four ACME Solar subsidiaries in their petitions against NTPC and a host of southern power Discoms. 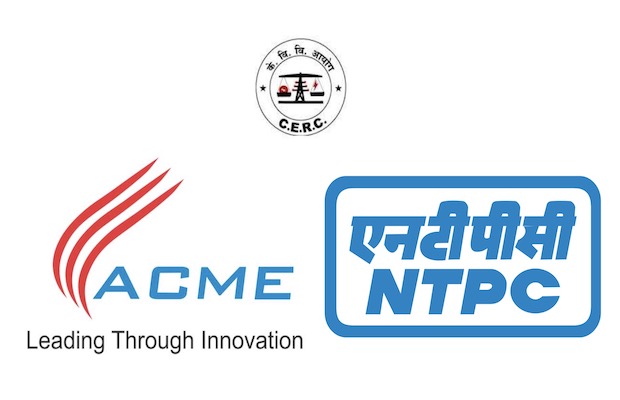 In its latest order, the Central Electricity Regulatory Commission (CERC) has ordered partial relief to four ACME Solar subsidiaries in their petitions filed against NTPC and a host of southern power distribution companies.

All four Independent Power Producers (IPP), in furtherance of respective Power Purchase Agreements (PPAs) with NTPC Limited, have set up solar power projects in different states of the country having a cumulative capacity of 150 MW.

In their petitions, ACME Kurukshetra Solar Energy, ACME Rewari Solar Power, ACME Mahabubnagar Solar Energy, and ACME Yamunanagar Solar Power had filed a petition against the respondents for non-compliance of the central commissions’ directions which were issued in an order dated October 9, 2018.

The order that declared the introduction of GST Law as a ‘Change in Law’ event under the PPAs. And had directed the Respondent to reconcile the claim amount to be paid to Petitioners with effect from July 1, 2017, and pay the same within 60 days from the date of issue of the CIL Orders.

The commission had also directed that in case the Respondents fail to do make the aforesaid payments within 60 days from order, they would attract late payment surcharge in terms of the PPAs, which is the key issue that has been raised by the four petitioners in the case. Shri P.K. Pujari, Chairperson, CERC, along with members Dr. M.K. Iyer and Shri I.S.Jha constituted the CERC bench.

The key issues, and the CERC view and decision on each, is encapsulated below:

The Petitioner has submitted that the Respondents have not complied with the Order and as such, they are in violation of compliance of the said Order and that the Commission may proceed against NTPC under Section 142 of the Act. Further, Late Payment Surcharge as per PPAs may also be levied on the Respondents after the expiry of 60 days from the date of submission of claims. Per Contra, the Respondents have denied the allegations.

To this, the Commission noted that none of the Respondents have refused payments to the Petitioners. And that NTPC has already answered all the queries raised by the Discoms and that the Discoms have suggested that the Petitioners may proceed to levy the Late Payment charges as per the provisions of the respective PPAs and raise the bills accordingly. In view of the above, the Commission holds that the Respondents cannot be held in violation of Order dated 09.10.2018. Therefore, the issue regarding the maintainability of the petition under Section 142 of the Electricity Act, 2003 is decided against the Petitioners.

Issue No. 2: Whether the Respondents should be directed to implement and fully comply with the Order dated 09.10.2018 issued by the Commission?

Issue No. 3: Whether the Respondents should be directed to pay Late Payment Surcharge as per PPAs from 15.01.2019 i.e. expiry of 60 days from the date of submission of the claim, applicable as per Commission Order dated 09.10.2018?

NTPC has been directed to pay the due claim to petitioner along with late payment surcharge through supplementary invoices within 30 days date of the order and claim the same from respondent Discoms.