In a detailed order with far reaching implications for multiple cases related to the same issue, the Central Electricity Regulatory Comission (CERC) has provided limited relief to Avaada Power Private Limited and Canadian Solar Holdings on their GST related claims. The pricipal issue for both firms was that the enactment of the GST law was a ‘change in law’, and as such, met the requirement for suitable compensation from SECI, the principal agency with which they had signed PPA’s. SECI in turn had tried to pass on the onus to discoms, on the principle of back to back passing of any change in cost to the ultimate buyer and user, with which it had signed PSA’s for the same power.  While Avaada (through its subsidiary) had claimed Rs 19.2 crores as compensation, Canadian Solar (through its subsidiary) had filed for Rs 22.17 crores of compensation from SECI. The order was dated January, 28, 2020. Shri P.K. Pujari, Chairperson, CERC, along with members Dr. M.K. Iyer and Shri I.S.Jha constituted the CERC bench.

The cases by both the firms had been clubbed together due to the similar nature of their petitions, in this case, an appeal to be provided compensation by SECI (Solar Energy Corporation of India) due to change in status of their projects caused by by the GST (Goods and Services Tax) that came into effect on July 1, 2017. Right after they had bid for, and won projects through SECI’s open tenders.

The key issues, and the CERC view and decision on each, is encapsulated below:

Issue No. 1: The introduction of ‘GST laws’ w.e.f. 01.07.2017 is covered under ‘Change in Law’ in terms of Article 12 of the respective PPAs (Power Purchase Agreement with SECI). Yes, stated the CERC, making it clear that compensation if payable, would be due.

Issue No. 2: Claims for additional higher expenses during construction period due to higher GST. The Petitioner/s have to exhibit clear and one to one correlation between the projects and the supply of goods and services duly supported by the Invoices raised by the supplier of goods and services The Respondent SECI is liable to pay to the Petitioners which is not conditional upon the payment to be made by the Respondent Discoms to Respondent SECI. However, the Respondent SECI is eligible to claim the same from the Respondent Discoms on ‘back to back’ basis above. The Claim shall be paid within sixty days of the date of this Order or from the date of submission of claims by the Petitioner whichever is later failing which it will attract late payment surcharge as provided under PPAs/PSAs.

Alternatively, the Petitioner and the Respondents may mutually agree to mechanism for the payment of such  compensation on annuity basis spread over the period not exceeding the duration of the PPAs as a percentage of the tariff agreed in the PPAs. The claim of the Petitioners on account of additional tax burden on “O&M” expenses (if any), is not maintainable.

Issue No 3. Based on submissions of SECI, the Commission clarified that computations used in previous cases could only be used for illustrative purposes,  and computation on account of GST, being change in law, shall be paid on exhibiting clear and one to one correlation between projects and supply of goods & services, duly supported by relevant invoices and Auditor’s Certificate by the Petitioners. For the record, the illustrative ‘table’ being mentioned is reproduced below, along with GST impact. 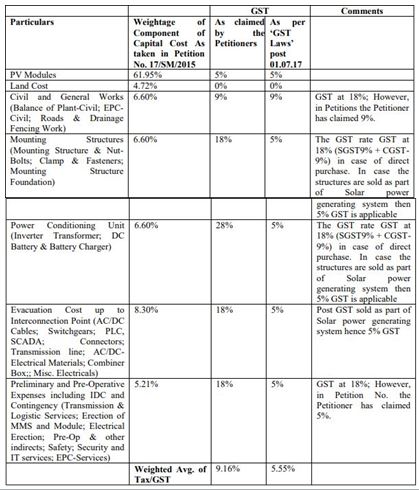 Issue No. 4: The claim regarding separate ‘Carrying Cost’ and ‘interest on working capital’ in the instant petitions was disallowed.

An interesting outcome of this order has been the iteration by the CERC that claims related to O&M will not be maintainable, when it comes to GST related claims. O&M, it has basically maintained, falls under the broader purview of ‘business risk’, which the firms take into account when making their bids.

The order is significant in that it will be used as a precedent for similar GST related issues by other developers too. By also quantifying the impact GST has had on project costs and tariffs, it will also hopefully give a clearer idea of remedial steps that the government could take to streamline taxation for the sector. For the Vineet Mittal led Avaada Power, the order should also be some relief after its plea was turned down in another petition against SECI it had filed.