BYPL has launched a pilot to establish solar microgrids, becoming one of the first discoms in the country to do so in an urban setting. 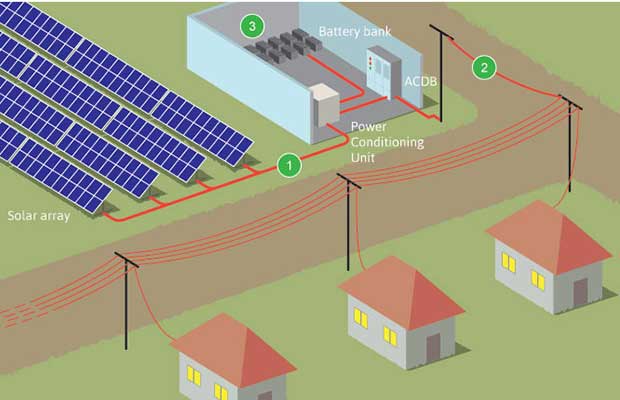 In its quest to take rapid strides for sustainable development, BSES Yamuna Power Limited (BYPL) has launched a pilot to establish solar micro-grids, becoming one of the first discoms in the country to do so in an urban setting. A similar roll-out is planned for South and West Delhi areas also.

Launched to accelerate the penetration of renewable energy as part of the discom’s Green Division initiative, these microgrids will combine rooftop solar with Li-Ion based battery energy storage systems.

As a technology demonstrator, four such micro-grids have been set-up at BYPL offices in East Delhi. The energy generated through rooftop solar is being used for catering to the internal power requirements of office loads and to charge the batteries. The surplus is fed into the grid, which has the potential to reduce the electricity bills.

Marking a leap in decentralized ‘distributed generation using energy battery storage at specific locations, these microgrids have multiple benefits, both for the consumer and the discom. They include: (i) Preventing outages: Support in sharing the load with DT, thereby, help in reduction of outages/trippings of DT due to overloading. (ii) Power availability even in case of an outage from the main Grid, (iii) Auto Demand Response in case of peak power (iv) Savings in diesel consumption (v) demand (vi) Reduction in Carbon Footprint and (vii) Reduction in energy bills.

The initial results of the pilot project at four BYPL locations in East Delhi were very encouraging according to the company. At these locations, the discom has installed rooftop solar plans varying between 5 kW and 7 kW and energy battery storage between 7 kWhr and 10  kWhr. They show that over this period only 8% of grid power (net of exports) was used. The balance 92% was generated and met through the solar plant coupled with the energy battery storage.

Apart from this, on an annualized basis, around 1245 liters of diesel and 0.24 million units of electricity amounting to around Rs 20 lakh can be saved on an annual basis. Additionally, it can also reduce CO2 of around 205 tons. A pan discom (including at consumer location) roll-out of 1000 such solar-energy battery storage microgrids has the potential to save around 62 million units of electricity, over 3 lakh liters of diesel amounting to around Rs 41 crore on an annualized basis – cumulatively for the discom and the consumers. Moreover, this will lead to a CO2 reduction of around 51,000 tonnes.

To gauge and assess the system performance of the microgrid pilot and to popularise the concept, the discom has tied-up with Council on Energy, Environment and Water (CEEW), South Asia’s leading not for profit research institution.

After very encouraging initial results of the project, BSES spokesperson said, “With an aim to increase the penetration of renewable energy, reduce carbon footprint and to help our consumers reduce their electricity bills, BSES is going higher in the renewable energy value chain. The energization of the microgrids is a testimonial to these efforts. The installation of microgrid applications as part of its green division initiative would act as a showcase for our customers to adopt and help in preserving the environment through a reduction in carbon footprint.”

The costs for establishing a microgrid are competitive and are likely to further go-down as the market trends suggest. At present, the cost of setting up a rooftop solar system is around Rs 40,000 per kW and around Rs 80,000 per kW for an energy storage system. This cost may further go down as the number of consumers increase.