For India to become a battery or any other storage technology manufacturing hub, we need to breed and encourage innovation at the grassroots level. Both public and private sectors need to collaborate closely with researchers at various institutes in India and fund different ideas in order to come up with better technology than what exists for India to become a true leader in this space, believes Sahil Shanghavi, Solutions Technical Lead, Schneider Electric. In conversation with Manu Tayal, Associate Editor, Saur Energy International, Shanghavi shared his views on various topics related to India’s renewable energy sector. Here’re the excerpts from that exclusive interview published in the Saur Energy International Magazine’s September 2019 edition:

Q In your view, what is the importance of decentralisation despite wide availability of central grid connection in India? Any example to justify this? 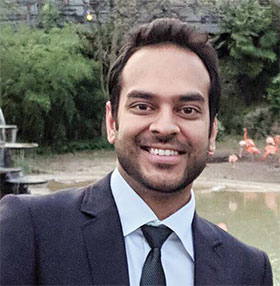 Decentralization of the Indian electrical grid is going to be instrumental in its growth but more importantly, in the improvement of its overall reliability and stability. I view decentralization in this context in a couple of different ways – by means of introduction of distributed generation technologies, off-grid networks, micro grid networks with the ability to connect to the centralized grid. Depending on the specific use case, any one of these may make more sense or none of these may be valuable.

For example, a city faced with both transmission and generation capacity challenges as is seen in all the large and growing cities of the country such as Mumbai, Delhi, Calcutta, Bangalore, Hyderabad and the likes, would be most benefited by large-scale deployment of distributed generation technologies. This could be in the form of rooftop solar, or smaller wind turbines, but could also utilize the newer battery storage technologies. These would not only provide greener generation to the cities but would help decongest the aging transmission infrastructure as well.

Whereas remote villages in India which are not currently grid connected and have poor access to infrastructure, would benefit most from being provided with electricity via an off-grid network and associated generation. I believe that multiple examples could be used where a micro grid network with the ability to be grid connected or a co-generation p lant could be considered valuable.

As I see it, manufacturing units which require highly reliable power or data centres would benefit from their own supply of power which could be used to back up the grid. Suburban areas which constantly face the nuisance of power outages would also benefit heavily from having their own micro grid network with generation and/or storage systems.

Q How plant owners in India can boost efficiency by using technologies such as data analytics, Artificial Intelligence or Big Data?

Over 65 percent of India’s generation comes from fossil fuels. The way I look at this, the step jumps in efficiency improvements can only be achieved for these plants by upgrading to better technology in the types of generators or turbines used. Most of them are older plants where the generators are almost always more than a couple of decades old. Thus, they lose out on capturing any real efficiency gains. AI and Data Analytics only truly come into play when the power plants using fossil fuels step into the 21st century. Most of the current coal and gas plants have the ability to help make significant efficiency gains by simply upgrading their generators/turbines. After which they can use AI and Data Analytics to figure out how to be more efficient and where they could make cost improvements.

On the other hand, when I look at the renewable energy plants – AI and Data Analytics can play a much bigger role in helping improve operational uptime/efficiency and overall energy production. But in general, all generation technologies can benefit from Data Analytics largely by helping figure out maintenance requirements, operational information, and downtime analysis. Fossil fuel plants can benefit from better insights into fuel consumption data to reduce overall costs.

Q As the Indian solar market is price sensitive, does adoption of digital technologies prove to be cost effective?

Q The government is mulling to make India a battery manufacturing hub while countries like China have already grabbed a major share globally. Given this, to what extent does India’s plans for storage manufacturing feasible?

For India to become a battery or any other storage technology manufacturing hub, we need to breed and encourage innovation at the grassroots level. When Tesla started out, most naysayers believed that most of everything it has achieved could not be done. This same drive is needed to innovate in India.

Currently, battery and other storage technologies are seeing an incredible amount of R&D globally. There is research going on in various materials other than the mainstream Lithium Ion, which already has been a giant leap from the old lead acid batteries. Universities in India also have some great research taking place. IIT Madras recently developed the first Iron-Ion battery. The point I am making here is that both the public and private sectors need to collaborate closely with the researchers at various institutes in India and fund different ideas in order to come up with better technology than what exists for India to become a true leader in this space.

We also need to have a plan in place for sourcing the specialized materials needed for these technologies as there are generally supply chain problems with availability of materials, like for making lithium ion batteries. The government will likely have to find ways to support this effort and help make it easier for companies looking to grow this sector.

Q What are the best kinds of renewable energy systems for homes? How cost effective are they?

Generally speaking, roof top solar panels and solar water heating systems are the only two options I see working as renewable energy systems for homes in India. But if we consider apartment buildings as a whole, if they do not face shading issues and have good solar potential, I would highly recommend them to install roof top solar panels. One concern here I have thought is that this would only make sense in states that have a decent net metering policy for consumers, such as Rajasthan.

(These are his personal views and not of Schneider Electric.)