“India Is Key To Doubling EDF’s RE Capacity By 2030”, Harmanjit Nagi

The Euro 69 Billion French energy major EDF is one of the few unapologetic champions of nuclear energy, seeing it as a critical support for the world to achieve its climate ambitions. The firm produces over 75% of its energy from nuclear power, with a recent focus on other renewable sources too. In India, the firm has big plans for both nuclear and solar, and on solar, it has made faster progress, thanks to the nature of the process. In an interview, Harmanjit Nagi, Managing Director, EDF India, lays out the firm’s progress and plans for India.

Q. Can you give a brief overview of EDF’s global portfolio? 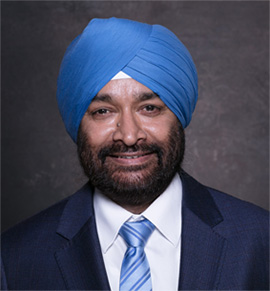 The EDF-group is a France-based electricity utility company with global presence in generation, transmission, distribution, energy supply and trading, and energy services. EDF is among the world leaders in low-carbon energy and has developed a generation mix consisting of nuclear power, hydropower, and renewables-based power. The EDF Group has operations in over 20 countries, with about 38 million customers.

EDF is a European leader in the development of renewable energy (RE) sources. It creates, builds, and manages RE power plants across the globe, and is the fifth biggest player in the world in this respect. Wind and solar photovoltaic power are the mainstays of EDF’s growth. The company also has strong presence in other areas of the RE sector, such as energy storage, and a very strong foothold in offshore wind power. EDF has always been strong in the RE markets of Europe and North America. The company now sees big opportunities for growth in emerging markets such as the Middle East, Brazil, China, and India. EDF had a RE generation capacity of 28 GW in 2015 and aims to achieve 60 GW by 2030, while tripling its business outside of Europe. These goals are aligned with the company’s raison d’être (corporate purpose) of contributing to a net zero energy future with low-carbon electricity and innovative technologies and services.

Q. Can you please elaborate on EDF’s presence in India?

The EDF Group has been present in India for more than 25 years and aims to support the country’s energy transition towards low-carbon sustainable future by leveraging innovative solutions. India is one of the main growth market for achieving two strategic goals: tripling EDF’s business outside Europe and doubling its global RE capacity by 2030. With the steps and policies announced by the government in recent years, India has become a very important market for RE projects, especially solar and wind. With the recent expansion of our RE portfolio and our presence across the value chain in areas that are crucial for reducing carbon dioxide emissions, EDF is now among the top 15 solar and wind project developers in India.

We have achieved a secured portfolio of 2.8 GW of RE capacity in less than four years and procured major smart-metering (Automated Metering Infrastructure, AMI) contracts in India. In solar energy, we have 207 MWp operating plants, 450 MWp under construction, and over 1350 MWp under development in the country, as of 2020. In addition, we have 269 MW of operational projects and 300 MW of wind energy projects under construction. We have also had successful discussions with the Nuclear Power Corporation of India (NPCIL) and recently submit them our binding techno-commercial offer for the development and construction of the biggest nuclear plant in the world, with six EPR units totaling almost 10,000 MWe at Jaitapur in Maharashtra. The recent contract by EESL to install five million smart meters in India has opened a new chapter in the development of our business in India. This is one of the two five-million smart[1]meter contracts awarded by EESL in India. In terms of number of smart meters, such contracts are very important. Ours is, by far, the most competitive and the most innovative AMI solution in India.

Q. Did you have to adapt the timeline of your projects, for instance in renewables or the 5 million smart meters project? How much delay are you expecting due to the ongoing pandemic

Like with most businesses, the Covid-19 crisis has impacted the execution of our projects to a certain extent. Our priority is to protect our employees and contractors, and we encourage them to abide by the strictest preventive and safety measures. The energy sector, meanwhile, has bounced back fairly quickly, and this makes us hopeful about the future. We are confident of our ability to make up for the lull we witnessed during the lockdown. I firmly believe that the energy sector can play a major role in reviving economic growth and investments after the Covid-19 crisis through its potential for creating quality jobs, especially in areas such as RE, smart cities, energy efficiency, and others. At the same time, we need to address the climate emergency, to ensure that growth and development are sustainable.

Q. Please give a brief overview about your plans for smart meter expansion in India.

The smart meter market in India is projected to grow to 300 million units. EDF currently holds one of the two largest smart-meter implementation contracts in India, for a total of five million smart meters, with Bihar alone accounting for almost half this number. We have completed the first stage already, with the installation of more than 100,000 smart meters in Bihar. The contract was awarded to EDF in association with Accenture Solutions Private Limited (India) in 2019. This is the first of its kind large-scale prepaid smart metering solution to be deployed in India.

We have deployed more than 85 people full-time on this project – a number that will eventually rise to more than 120. So far, we have employed 27 Indian engineers while our IT subcontractors have assigned 30 staff for the project. The operational teams in Bihar are qualified to mount meters. The deployment of five million smart meters is expected to crate over 3,000 jobs in the region. Meanwhile, the smart-meter project in New Delhi, which was commissioned in January 2019 (with NDMC, involving 75,000 smart meters) has been completed and the system is fully operational.

We are always on the lookout for new opportunities to expand in India. We aim to be one of the key partners in the country’s ambitious energy development program, which lays strong emphasis on building low-carbon electric systems. We are also in the process of bidding for smart-meter projects across many Indian states as a part of our expansion efforts.

Q. Are there any plans to expand your solar energy portfolio in India?

Solar is a dependable, low-carbon, cost-effective energy choice. Moreover, the solar segment is growing quickly on the back of technology advancements and lower generating costs. EDF has a lot of experience with solar energy as the company is established in 13 countries with major projects. The 800 MWc project with Dubai Electricity & Water Authority; the 146 MWc project with Bolero in Chile; and the 400 MWc project with Pirapora in Brazil are some of our big ventures. Last summer, our subsidiary EDF Renewables won the Al Dhafra project (2 GW), the world’s most efficient photovoltaic power plant, in Abu Dhabi.

EDF participated in solar PV tenders last year and won three projects totaling 1350 MWp, which will be completed by 2022.

We aim to help the Indian government achieve its target of 220 GW of non-fossil generation by 2022. The EDF Group currently has a portfolio of 2.8 GW of RE projects in India in various stages – operational, under construction, and in development. This makes us one of the top 15 players in the market. We plan to continue our rapid growth, fueled by the local experience and support of our shareholders. We will also expand our team and hire people with high-level skills.

Q. What is your view on the government policies for the solar sector?

EDF is a natural partner as India converts its energy ambitions into reality. We applaud India’s efforts in the fight against global warming, and its energy policies which aim for a carbon-free energy mix by 2030 with 40% of nuclear and RE sources.

We are particularly excited about solar energy, as we have a lot of experience in that area. Recently, solar tariffs in India dropped to Rs 2/kWh in SECI’s auction, and we are confident that they can be further reduced if the price of equipment decreases and as long as the Indian economy continues to perform with a strong Rupee, low inflation, low interest rates, and if no new taxes are imposed on the sector.

To achieve the most competitive tariffs in India, the cost of investment must be continuously optimized. This will allow the implementation of improved technologies such as bifacial and higher[1]efficiency solar panels, more performant wind turbines with higher capacity and larger diameter, and innovative solutions such as molten salt storage solutions for solar electricity or wind-solar hybrid installations combined with energy management systems. Such solutions are presently being experimented by EDF among others.

Q. Are there any partnerships/ collaborations that the company is planning in India?

EDF’s commercial momentum in the countries where the company is established pursues the objective of establishing itself in the long term by partnering with the local economic and industrial fabric of the countries. We believe that the most adequate solutions to address India’s issues are thought out by local businesses and start-ups. Thus we are constantly looking for new partners. This is what we are already doing in current projects by bringing in local companies.

This is the meaning of the EDF Pulse India program launched last year which allows Indian entrepreneurs/startups to present their technological or commercial business ideas to a jury of energy experts. The finalists are selected to be accompanied financially and technically based on the relevance of their solutions with local issues. Existing in several other countries, the Pulse Start-up Awards aims to identify innovative low-carbon local players who are fully aligned with the country’s energy challenges and EDF’s values.

EDF Group has already joined forces with companies within joint ventures or consortium with international industrial companies to develop large-scale projects in India. This is the case with the 4 solar power plant construction projects in northern India jointly developed by Total EREN and EDF Renewables as part of the EDEN Renewables joint venture.

Q. Explain your company’s expansion and investment plans for the Indian market?

India is one of EDF’s focus markets, a crucial part of the company’s goals of tripling its business outside Europe and doubling the RE capacity worldwide by 2030 and EDF aims to be one of the key partners in India’s energy development program. To achieve this, we intend to hire many engineers and technicians – in both solar and wind energy business – by 2021 and keep looking for promising Indian start-ups to partner with. We are keen to implement solutions that best fit the Indian context. For this, it is important to be connected to the economic fabric and support innovations. And that’s what the “EDF Pulse India” challenge is all about. EDF Pulse has been launched in the UK, France, Brazil, Africa and China .Since the launch of EDF Pulse in 2014 more than1,800 start-ups have applied for the awards, and approximately 60 projects have been supported by the EDF Group. In India, the initiative aims to meet the country’s energy challenges and to build a sustainable, resilient ecosystem for future generations.