Niti Aayog has issued the draft RfP for the selection of private entities to set-up manufacturing facilities that produce Advance Chemistry Cells (ACC). 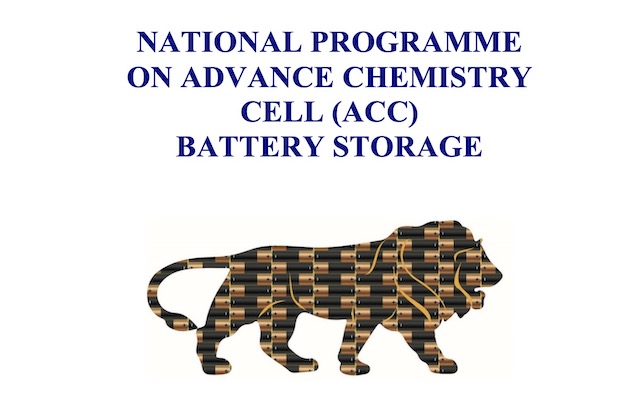 The Government of India through the Department of Heavy Industry (DHI) intends to develop giga-scale advance cell manufacturing for domestic application and promotion of diverse energy sources, to ensure overall energy security for the nation in the long run. In line with this, it has launched and intends to implement the National Programme on Advance Chemistry Cell Battery Storage. To achieve this, Niti Aayog, on behalf of the Government, has issued the draft Request for Proposal (RfP) documents for selection of private entities to set-up manufacturing facilities that produce Advance Chemistry Cells (ACC).

Advance Chemistry Cells (ACCs), as Niti Aayog defines it, are the new generation advance storage technologies that can store electric energy either as electrochemical or as chemical energy and convert it back to electric energy as and when required. Globally, manufacturers are investing in these new generation technologies at commercial scale to fill the expected boom in battery demand through 2030. Considering its importance and the emphasis on transition to a clean energy economy, the Government of India in March 2019, launched the National Mission on Transformative Mobility & Battery Storage, under the Chairmanship of the CEO, NITI Aayog.

This umbrella-level initiative proposes various fiscal incentives through a single-window mechanism, to make the domestic ACC manufacturing industry, globally competitive. In addition, the Programme also proposes a composite framework for the imposition of suitable Basic Custom Duty with the intent to promote phased manufacturing of ACCs and its components in India and makes recommendations for promoting the overall market demand for ACCs in India.

In view of the above, the draft model bid documents have prepared. All stakeholders are requested to provide their written comments, if any, by or before December 14, 2020.

The Selected Bidders would be entitled to receive financial benefits in the form of a subsidy in accordance with the Programme. A Bidder selected through this RFP, to be eligible for this subsidy, would have to commit to set-up an Advance Chemistry Cell manufacturing facility of minimum 5 GWh capacity and establish an Advance Chemistry Cell manufacturing facility with value-addition of minimum 25 percent at the mother unit level and minimum 60 percent overall, in accordance with the Programme Agreement.

The Government shall execute a Programme Agreement with the SPV. The State Governments shall also extend support and provide additional incentives for implementation of the Project, through the execution of a tripartite agreement between the SPV, State Government and the Central Government.

As per the RfP, all the bidders will be required to deposit, along with its Bid, bid security calculated at the rate of 1 percent of Rs 225 crore per GWh. It has also been clarified that the amount of Bid Security shall be subject to a ceiling of Rs 10 crore up to 5 GWh; Rs 15 crore up to 10 GWh and Rs 20 crore) up to 20 GW of annual ACC committed production capacity.

To be eligible for short-listing, a Bidder shall fulfil the following conditions of eligibility:

The Structure of the documents and the Model of the bid adopted under the Programme encompasses the following key features, first, the cash subsidy shall be offered on output, i.e. the volume of cells manufactured and sold by the beneficiaries. Second, it’s a technology agnostic initiative, whereby only cells with higher performance specifications (i.e., Energy Density & Cycle Life) shall be eligible to avail of the incentives.

The subsidy support will be limited to a cumulative 50 GWh of ACC manufacturing capacity in India, with a single beneficiary not allowed more than 20 GWh cell manufacturing facility. Furthermore, to encourage economies of scale, the minimum bid may be restricted to 5 GWh capacity, which may be developed in phases over a five-year window. Last but not the least, in order to ensure the bankability of the manufacturing facility and with emphasis upon key performance indicators, the incentive framework has been fused with the principles of Public-Private Partnership (PPP).

The Union Cabinet has approved the Production Linked Incentive (PLI) Scheme with incentives outlay worth Rs 2 lakh crore for 10 “key sectors” including telecom, electronics, solar PV, and batteries. One of the 10 key sectors is the ACC battery sector, with an outlay of an impressive Rs 18,100 crore.