According to a report by ACEEE, there are many states in the United States that have done little to reduce barriers for EV adoption.

With transportation now the largest source of US greenhouse gas emissions, several states are taking comprehensive steps to help enable residents and businesses to use and charge electric vehicle (EV), yet many others have done little to reduce barriers, according to a report by the American Council for an Energy-Efficient Economy (ACEEE).

Most of today’s electric vehicles (EVs) cause significantly fewer emissions overall than their gas-powered counterparts, and many have lower lifetime ownership costs, thanks to low fueling and maintenance expenses. But the higher initial purchase cost and lack of access to vehicle charging remain barriers for many households and fleet owners—obstacles some states are mitigating by offering incentives to buy EVs, adding more charging options, and setting lower electric rates at preferred charging times.

The State Transportation Electrification Scorecard finds that California is far and away the national leader in enabling the use of EVs. It is the only state to set deadlines for electrifying transit buses, heavy trucks, and commercial vehicles. The state is also one of few to offer assistance for lower-income drivers replacing older, high-polluting cars with zero- or near-zero-emissions vehicles, and it plans to deploy chargers in economically distressed and environmental justice communities.

The report highlights that while many states have taken promising steps to electrify transportation, all have considerable room to improve their policies. Ultimately, a full shift to affordable and accessible electrified vehicles—powered entirely by zero-carbon energy—will be necessary to bring emissions to zero and support liveable communities.

“Transitioning to electric vehicles is vital for the climate and for reducing costs for households and businesses,” said Bryan Howard, state policy director at ACEEE and lead report author. “The leading states are embracing this transition, but many more are just starting, even as the automakers are preparing a burst of new electric models.”

ACEEE identified three policies that are likely to have the greatest impact on spurring the adoption of EVs: ZEV mandates and electric vehicle deployment targets, financial incentives for vehicle purchases, and incentives for installing vehicle chargers. The report scored the states on 40 policies in total, identifying where legislatures, executive agencies, and utility regulators in each state can make progress. 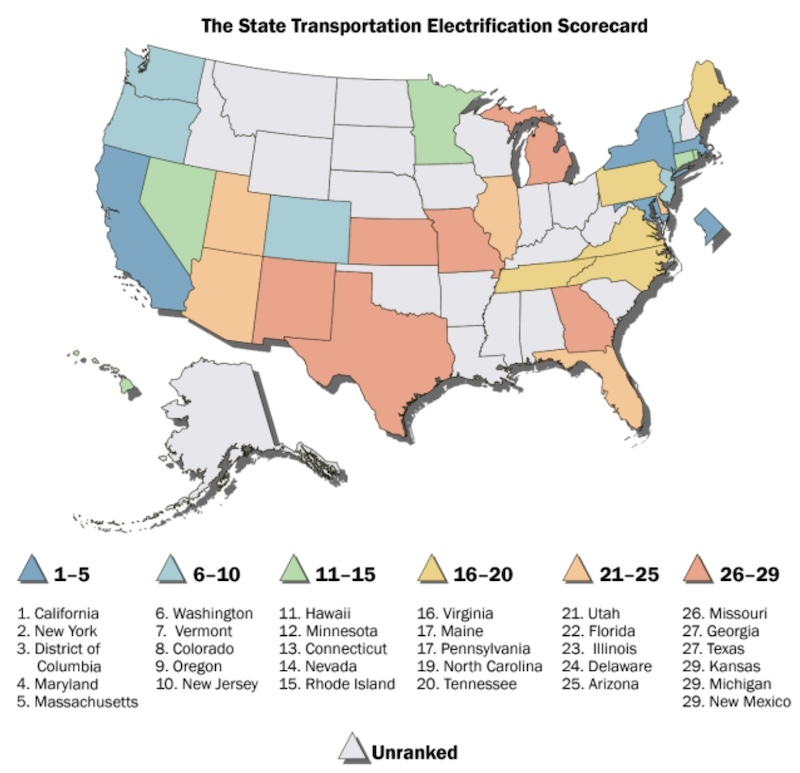 For states not in the top 30, the report recommends a series of foundational steps, including comprehensive planning efforts with specific goals, benchmarking progress, collecting data, incorporating spending carve-outs or funding adders for low-income, economically distressed, and environmental justice communities in state and utility EV planning, leveraging existing sources of funding such as the Volkswagen settlement fund, and establishing clear direction to encourage utility and third-party investment in charging stations.

For states that are represented in the top 30 but are in earlier stages of policy development, the report calls for offering on-the-hood incentives for purchase of EVs, codifying targets for vehicle and charger deployment, allowing utilities to make charging infrastructure investments, establishing clean energy targets for the electric industry, and setting overall greenhouse gas emissions reductions goals for the transportation sector.