Indian electric scooter maker, Ather Energy today inaugurated its new experience center (retail outlet) ‘Ather Space‘, at Lajpat Nagar, New Delhi. This is Ather Energy’s 10th experience center in India, to provide a unique ownership experience along with service and support for owners. The Ather 450X,  Ather’s main offering, alongside the Ather 450 plus will be available to test ride and purchase.

The firm began deliveries of the Ather 450X in the Capital in early April and also invested in setting up public fast-charging points, the Ather Grid across the city. The company has set up 14 fast-charging points across key hotspots in Delhi, Noida, Gurugram & Ghaziabad and aims to double the number of charging stations by 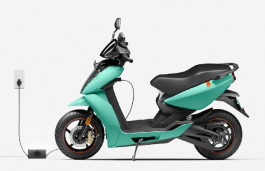 the end of this year. The fast-charging points in Delhi are available in locations like Green Park, Dilshad Garden, Krishna Nagar, and Connaught Place. A key aspect of Ather’s fast charging points is that they require minimal engagement, other than plugging in, from a user. No clicks to authenticate, app to pay etc.

The Ather 450X comes in four different colors- grey, white, green, along with the limited-edition Series 1. It comes with an 85 km of true range and an 80km/h top speed. the scooter is powered by a 6 kW motor and a 2.9 kWh of Li-ion waterproof battery with a 3-year warranty on the battery as well as the vehicle. The scooter can go from 0 to 40 km/h in just 3.3 sec in Warp mode. It can fast-charge at 1.5km per minute, additionally, the electric scooter has a 4G SIM card and Bluetooth connectivity, allowing riders to manage phone calls and music on the touchscreen dashboard. The 7” touchscreen dashboard, comes with a color depth of 16M and a Snapdragon Quad-Core processor. Ather 450X utilizes Android Open Source to offer Google Map navigation, on-board diagnostics, and other unique features like Over-the-air updates, Auto Indicator off, and Guide-me-home lights. The prices in Delhi would be out soon however, prices in Bengaluru after FAME II incentives are Rs. 1,25,490 and Rs. 1,44,500 for 450 and 450X , respectively.

The EV maker has also given a comparison with other domestic electric scooters of the country and claimed that Ather tops every aspect. 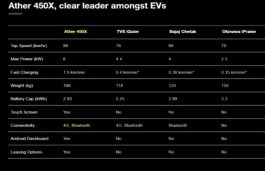 Ather Energy inaugurated its first experience center in Bengaluru in June 2018. Earlier this year, Ather expanded its presence across 27 cities including Mumbai, Pune, Hyderabad, Kochi, Jaipur, and Ahmedabad. Co-founder of Ather, Tarun Mehta announced that the firm is targeting to expand its distribution across 100 cities by the end of the fiscal year 2023 (FY23), along with installing 500 charging points by the end of FY22. Additionally, he declared that the firm will expand its manufacturing capacity to 500K units by FY23.

The electric scooter maker has reported its best quarter (Jan-Mar) till now, with a rise of 250% in its sales and six times increased test rides. The firm has also stepped up from 79 to 142 charging points in just three months.

Mr. Mehta informed today, that their manufacturing is completely domestic from the dashboard screen to the scooter batteries. Only the battery cells being the imported part. Their production capacity has reached 1750 units per month in 2021, which was 750 in 2020. Currently, it is at an annualised 150,000 units .