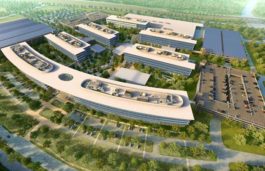 Toyota has announced that SunPower is designing and plans to construct a 7.75-megawatt solar power system at its North American headquarters in Plano, Texas The 7.75-megawatt solar power system is expected to generate 25 percent of the headquarters’ total electricity deman. The project will be comprised of three solar carport structures using high efficiency SunPower […]