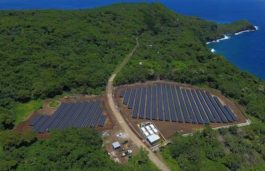 Tesla has revealed that with SolarCity it is powering nearly the entire island of Ta’u in American Samoa with solar power. Tesla officially acquired SolarCity on Monday. SolarCity in a blog notes that Ta’u now hosts a solar power and battery storage-enabled microgrid that can supply nearly 100 percent of the island’s power needs from […]